HomeNewsTom Morello on Nova Twins: “This is an incredible band who deserve...
News

Tom Morello on Nova Twins: “This is an incredible band who deserve to be huge” 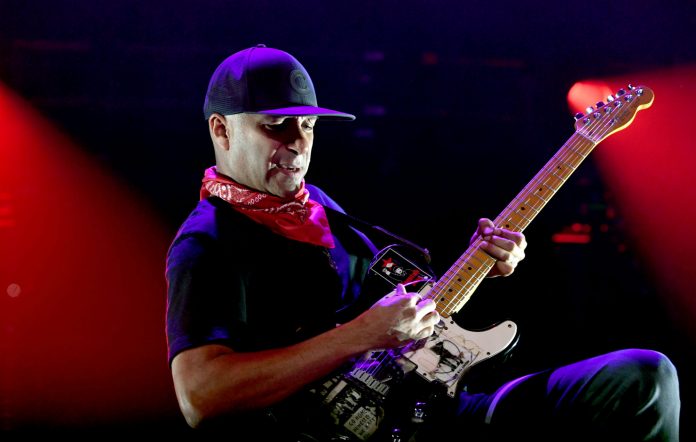 Tom Morello has called Nova Twins “one of my favourite bands” and said they are “an incredible band who deserve to be huge,” in a new interview with NME.

READ MORE: Nova Twins: “The massive surge of POC pop-punk and rock is an act of rebellion”

Morello shared his admiration for the former NME cover stars saying: “I love that band. From the first time I saw them in soundcheck, I thought, ‘This is an incredible band who deserve to be huge’. “

“Everything about it is great. There’s a tremendous musicianship, a raw intensity as well as a fantastic vibe and an underlying sense of purpose. They’re one of my favourite bands,” he continued. “Over the course of three decades, I’ve seen a lot of great bands that deserve to get their dues but they don’t. Nova Twins are already on that road to really being a game-changer. “

When asked about a possible collaboration, Morello said: “Anytime they want to record a song together, I’m here. Actually, maybe I’ll reach out today!”

Morello’s new album ‘The Atlas Underground Fire’ is out Friday (October 8) and sees him trying to prove ​​”the electric guitar is an instrument that doesn’t just have a past; it has a future.”

But Morello doesn’t think all guitar music is good. Speaking about the current rock resurgence in the mainstream – with everyone from Olivia Rodrigo (with her pop-punk inspired debut album ‘Sour’) to rapper-turned-rockstar Machine Gun Kelly taking influence from the genre – Morello said: “First of all, I would say that guitars falling out of mainstream music says more about mainstream music than it does about guitars.”

“I’m not sure that pop artists putting a Marshall stack sheen on some shitty pop song is exactly what the world needs right now,” he added. “But there’s nothing like the visceral feeling of rock music. How that connects to an audience is something that will continue to come back around.”

Nova Twins recently supported Bring Me The Horizon on their POST HUMAN UK arena tour. Speaking about the show, NME said: To add to the sense of occasion, Nova Twins join the band for a raucous rendition of their collab ‘1×1’ and punk prince YUNGBLUD comes out for an unhinged run-through of ‘OBEY’.”

“Bring Me couldn’t have really brought any more. For all the theatrical drama and bombast – almost bordering on Muse levels – everything is anchored a sweaty rock club basement attitude and sense of community.”

The post Tom Morello on Nova Twins: “This is an incredible band who deserve to be huge” appeared first on NME.