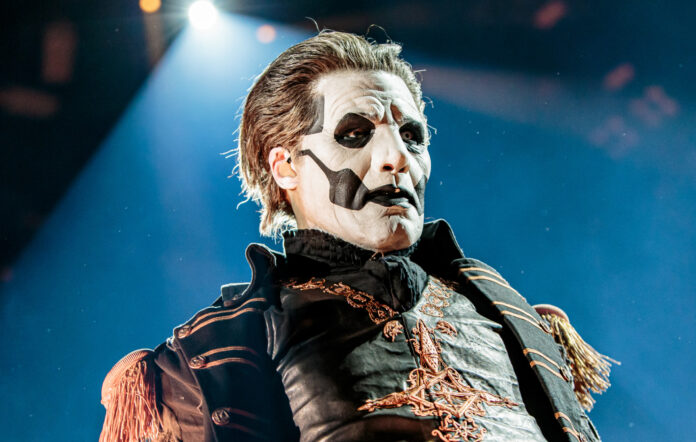 Ghost mastermind Tobias Forge has said his next album will have a different “vibe” to what’s come before.

The Swedish heavy metal titans released fifth album ‘Impera’ earlier this year but according to Forge, he’s already working on a follow-up.

Speaking to Rolling Stone, he confirmed “there are a lot of things in my head that I feel like I want to explore,” with album six.

“I’ve never really ended an album production without feeling like there are things that I would want to do differently next time,” he continued “Slowly and steadily, you try to perfect it.”

He went on to say that “there’s a big difference between recording in your hometown and recording on a tropical island. And none of it is better than the other; it just means two different things.”

“So right now, I’m more about vibing,” Forge said. “I’m trying to build a new vibe for writing this record now, just to see to it that I don’t end up repeating myself. I want to evoke a few good things from the past and try to eradicate some of the things I didn’t like.”

Ghost are set to play Download 2023, alongside the likes of Metallica, Bring Me The Horizon and Slipknot.

Speaking to NME recently, Download boss Andy Copping tipped Ghost as a future headliner. “There are the bands that are coming through now. Ghost, Architects, Parkway Drive all have good slots at Download this year but they’ve definitely got the opportunity of taking that next step to headline status. I’d like to see that happen as well. Then you’ve got a band like Enter Shikari who headlined the Download Pilot in 2021, there’s no question that they have the making of a proper Download headliner.”

Copping continued: “You don’t want to rely just on the heritage acts. Download fans are a lot more open to giving newer artists opportunities than they were, say, 10 or 15 years ago. We can’t just sit there and expect the same headliners year in, year out. We’ve got to try and freshen it up a little bit.”

The post Tobias Forge says Ghost’s next album will have a different “vibe” appeared first on NME.