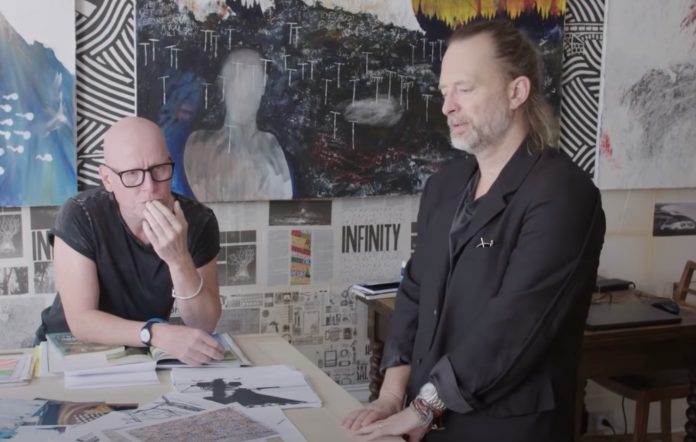 Thom Yorke has opened up about working with artist Stanley Donwood on creating Radiohead’s album covers.

In a new short film for Christies (which was made to coincide with the display of six of Donwood’s ‘Kid A’ era paintings at the auction house), Donwood and Yorke recall their first meeting together at art college and how Donwood later went on to create the cover artwork for ‘The Bends’.

Yorke recalled: “He was the guy at art college who could actually paint. They kicked me out.”

Yorke explained that when the band began, he couldn’t deal with the graphic design side of things and so approached Donwood for help.

Yorke said: “When we first signed a record deal and first had to deal with the graphic designers and so on, I was like: ‘I can’t cope with this, this is sort of like a manufacturing business.’”

Donwood added: “He phoned up one time and said do you want to have a go at doing a record cover…It’s quite rare for a band to be as interested in their visual representation, as interested as in the art that accompanies it.”

Elsewhere in the film, the pair discuss a series of Donwood’s ‘Kid A’ era paintings and also how Yorke turned back to art following the ‘OK Computer’ tour which left Yorke feeling “ragged”.

Yorke explained: “After the ‘OK Computer’ tour I was a big ragged and couldn’t really do anything creatively and my partner Rachel said ‘You should just go back to your art, stop doing music for a while because it’s too loaded.”

Donwood goes on to describe how Radiohead bought a barn and he and Yorke went on to paint there for a time. “Suddenly we were in this big space and painting seemed like the right thing to do,” Yorke says.

Donwood added of his work with the band: “I find it hard to look at these without hearing the music, it’s kind of in them: it’s encoded.”

The band are set to release a joint re-issue of ‘Kid A’ and ‘Amnesiac’ that includes a third disc of previously unreleased material.

The group have also developed an online “upside-down digital/analog universe” with the release that will also integrates Donwood’s work.