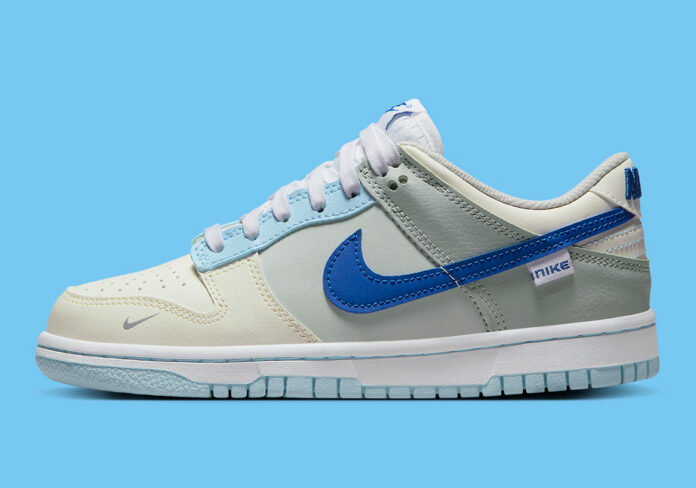 From establishing a collection of nods to various HBCUs to mimicking the Japanese style of Sashiko embroidery, The Swoosh continues to build out its ever-expansive roster of Nike Dunk propositions. Refusing to neglect the youth’s ability to partake in one of the most heralded silhouettes of the year, the Beaverton-based brand is employing a multitude of Swooshes to aid this grade school model in its inception.

Each panel of the model seemingly takes on its own aesthetic, with the forefoot’s vamp and mudguard bearing a light cream hue fit with a silver mini Check, whereas its midfoot panel interjects with a greyscale arrangement. While the model’s collar matches the hue of its forefoot, the panel presiding above takes on a darker grey accompanied by a seldom green undertone. A crisp white midsole, mesh tongue construction and laces offer a quick reset before vibrant “Royal Blue” Swooshes, tongue logos and raised embroidery on the heel tab provide a brightened brush of color next to a baby blue quarter overlay, heel stitching and tread.

Enjoy official images of this kids-exclusive Nike Dunk Low while we sit tight on further release details as they’re made available.

In other news from under the brand’s umbrella, UNDERCOVER’S Nike Air Force 1 Gore-Tex flaunts a black-on-black ensemble.