HomeMusicThese Management Firms Are Betting On Producers and Songwriters As the ‘Bellwether’...
Music 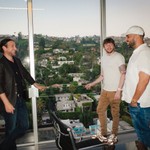 The summer of 2020 was approaching, and BTS needed a seasonal hit. On the hunt for this smash song was Columbia Records CEO Ron Perry, who put in a call to Neil Jacobson, founder/CEO of Hallwood Media, a Los Angeles-based agency that exclusively represents songwriters and producers. Jacobson passed the brief to his client, David Stewart, and he got to work.

By late August, BTS’ “Dynamite,” the song Stewart had co-written and produced, was No. 1 on the Billboard Hot 100. While Stewart was already well-established with previously co-written singles, like “What a Man Gotta Do” for the Jonas Brothers, having Jacobson play middleman led to his biggest break yet. It also allowed him to focus exclusively on the music.

“Dealing with my own negotiations was difficult, because I was always in the firing line,” says Stewart. “Removing myself from that by bringing on management was game-changing, because it makes everything feel like it’s got a suit on. It makes it feel serious.”

Launched in May 2020, Hallwood represents roughly 90 writers and producers, including the Grammy-nominated Murda Beatz (Drake, Ariana Grande) and Jeff Bhasker (Kanye West, Bruno Mars). It’s also one of the handful of growing independent agencies focused on representing songwriters and, more recently, an influx of producers.

“More people need to license more music than ever before, [and] you have this massive group of people that are going to make more music than ever all over the world,” says Jacobson. “As I move up the conveyor belt of this business, I feel like the songwriter and the producer are going to be the bellwether and give the purview for me and my team as to where the future of this business exactly will go.”

Jacobson plans to expand his roster to 200 clients by 2022, eventually resembling “a major Hollywood agency.” For the former president of Geffen Records, this robust scale is both a major innovation and a key to Hallwood’s success. “With that big number of songwriters and producers,” says Jacobson, “I provide a better service. It’s the ability for us to get the best music to the customers.”

But succeeding in this market isn’t simply dependent on size. Sydney-based Page 1 Management, founded in 2009 by CEO Ashley Page, represents a dozen clients, including Grammy-winning producer Joel Little (Taylor Swift, Lorde). For Page, the decision to focus on writers and producers came after coordinating a sold-out U.S. tour for an alternative/indie band that would sell out 3,000- to 4,000-capacity venues, then feeling concerned when that tour was considered a success after only breaking even. “That’s the point where you have to wonder what makes sense financially,” says Page.

By doubling down on writers and producers, these management companies can create income streams free from the constraints of touring — a blessing during the pandemic. (Both Hallwood and Page 1 agents receive around the standard 20% commission fee.) And crucially, with artist needs cut from the equation, these agencies can offer the visibility and protection that writers and producers aren’t as likely to get on their own — especially those just starting out. “Having management gave me a finesse,” says Stewart. “It’s what has turned it from being like, ‘I do this,’ to ‘I really do this.’”

This story originally appeared in the Oct. 23, 2021, issue of Billboard.

Share
Facebook
Twitter
Pinterest
WhatsApp
Previous articleDr. Dre shares heartfelt message sent to him by Snoop Dogg: “You got your soldiers with you”
Next articleThe Beatles’ ‘Let It Be’ Returns to Billboard Charts After Special Edition Reissue