HomeNewsThe Zutons’ Dave McCabe on working with Nile Rodgers on the band’s...
News 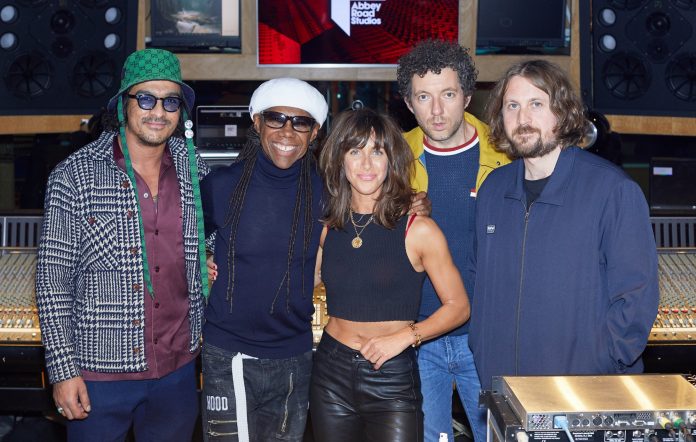 The Zutons are recording their first album in 13 years at Abbey Road Studios, with Nile Rodgers on production.

The new studio sessions come after the Liverpool band reunited for a tour celebrating the 15th anniversary of their 2004 debut album ‘Who Killed…… The Zutons?’ in 2019.

Speaking to NME, frontman Dave McCabe said after their last album – 2008’s ‘You Can Do Anything’ – the band had all fallen out. “We all hated each other, but we never quite split up,” he said. That anniversary tour was a way to “test the water” and see if they could make things work again. When they realised they could, they began to write new music for the band.

The four-piece are now enjoying some uncharacteristically relaxed time in the studio working on their fourth album. “Normally we’re arguing by now and just saying really nasty things to each other,” McCabe said. “I think Nile’s bringing the best out of us as a band.”

Working with the disco legend was originally drummer Sean Payne’s idea, with the frontman saying they knew they’d be able to get Rodgers to listen to music they sent him thanks to “the advantage of past success”. “He came back and he loved them, and next thing we were on a Zoom with him,” he explained. “That was like, ‘OK, we’re doing something right and it feels good’. Having Nile on board is a massive confidence boost.”

McCabe did have some reservations about what it would be like to work with the star, though. “I thought, ‘Is he just gonna turn up and start playing rink-a-dink-a-dink disco stuff?’,” he said. “But he hasn’t played a note. He’s just suggested things and let us build on it.”

One of Rodgers’ more unusual suggestions came when the singer was struggling with a vocal part, suggesting that the problem was that McCabe wasn’t wearing sunglasses. After finding that it helped with his singing, he then found another benefit to Rodgers’ shades-indoors move: “After, I came in the room and started talking about this song and I noticed everyone started taking me more seriously and listening to what I was saying. I was like, ‘Oh my god, this sunglasses trick works’.”

McCabe describes the music The Zutons have been working on so far as “quite happy, going out music” and “very much a joyous thing” with “a lot of singing along – all the band singing”. Part of that mood stems from the frontman going through some positive changes in his life, including becoming a father and being nine months sober.

“I’m reconnecting with how I was when I was 16,” he explained. “I’ve started to like myself again as a person. Getting up in the morning and brushing my teeth used to be so stressful – I couldn’t wait to get pissed – but now I have to get up and look after my son, so I’ve got a new lease of life and new responsibilities. But with that I get my own enjoyment back and what I was good at.”

The songs on the new record also tackle some of the frontman’s issues. “There’s one about me going out a lot that Abi [Harding, saxophonist] sings,” he said. “It’s from my girlfriend’s point of view. It’s called ‘Communicate’ and it’s me saying sorry to her. It made her cry when I played it to her, so that’s a good sign. People associate tears with bad things, but I want people crying all the time, cos that means you’re doing something right.”

Another track, ‘Creeping’, is about “going out and being scared to dance”. “I always found when I was on drugs that I’d be scared to dance,” McCabe explained. “Because I was so coked up and a white guy, I couldn’t really find the groove. I remember one night I went to the toilet and had a line and started dancing in the cubicle and thought, ‘This isn’t gonna work’ and left. I went to the next bar and just sat there all night.”

Some tracks have a more surreal twist, like ‘Pauline’, which the singer and guitarist said was inspired by a metal safety bar in a swimming pool. “I had a lot of mushrooms and I couldn’t stop staring at it all night,” he said. “I named it Pauline and, when I wrote the song, it turned into this whole other story about how I hadn’t been in a swimming pool for years and enjoyed myself, and this metal bar made me feel safe.”

As well as working with Rodgers on the album, The Zutons’ new material has already received the approval of another musical icon. “Paul Weller came down to the studio yesterday and we put some stuff on for him to hear,” McCabe said. “He loved it, he thought it was great. He said my voice sounded great.”

Although he can’t say for sure what the album will sound like yet because the band are only halfway through it, McCabe said that working with Rodgers didn’t mean they were making a disco record. “There’s defo funk and there’s defo soulful elements, but it’s not ‘Good Times’ part two,” he said. “It’s not even ‘Get Lucky’ part two. I don’t think anyone wants that, and that’s not us.”

As well as being in the studio with Rodgers, The Zutons also supported him and Chic in Liverpool last month. “That was my first gig sober so it was a bit weird, and cos it was in Liverpool everywhere you looked was someone you knew, so it was a bit nerve-racking,” McCabe said.

“But it was amazing. It felt like a comeback from these last two years.”

The post The Zutons’ Dave McCabe on working with Nile Rodgers on the band’s first album in 13 years appeared first on NME.