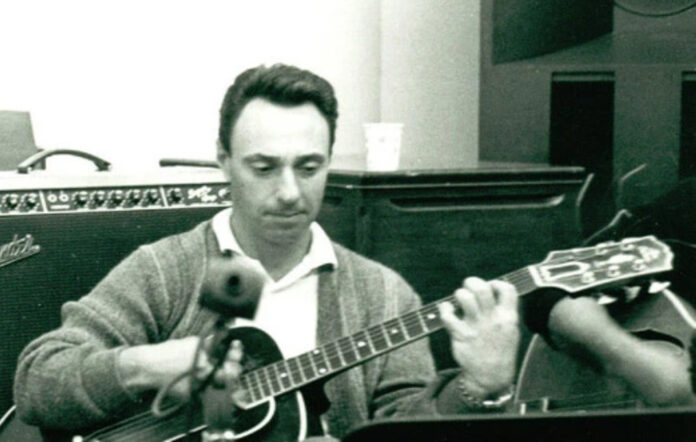 Bill Pitman, a renowned guitarist and member of iconic collective The Wrecking Crew, has died at the age of 102.

As reported by The New York Times, Pitman died on Thursday August 11 at his home in La Quinta, California. No cause of death has been revealed, however the guitarist and bassist reportedly spent the last month of his life recovering from an accident that left him with a fractured spine.

Born on February 12, 1920, Pitman was raised in a musical household, as his father worked as a staff bassist for programming at NBC. His journey with music began at age five and through high school, making regular treks from New Jersey to Manhattan as an admirer of the local jazz scene. He began playing in jazz clubs around LA in 1951 (at age 31) and his career catapulted after scoring a regular gig in Peggy Lee‘s backing band.

He went on to perform regularly for The Rusty Draper Show, a radio gig that he stuck with for three years before being poached for session work by artists like Al Hendrickson, Howard Roberts, Buddy Rich and Red Callender. His intro to rock’n’roll came at the hand of Phil Spector, who, after a chance meeting with Pitman, recruited him into his cohort of big-name session players.

Though unnamed at the time, this cohort – which featured a fluctuating roster of members all based in LA – would go on to be dubbed by member Hal Blaine as The Wrecking Crew. Their first hit was Spector’s 1958 single ‘To Know Him Is To Love Him’, which led to Pitman being invited to all of Spector’s future recording sessions.

As a member of The Wrecking Crew, Pitman performed on albums by the likes of The Byrds, Nancy Sinatra, James Brown, The Monkees and many others.

Some of his most revered contributions include work on The Beach Boys‘ ‘Good Vibrations’, Bob Dylan‘s ‘Mr. Tambourine Man’, The Ronettes‘ ‘Be My Baby’, Frank Sinatra‘s ‘Strangers In The Night’ and Barbra Streisand‘s ‘The Way We Were’.

Pitman’s most recognisable work is said to be the acoustic guitar playing on ‘Wouldn’t It Be Nice’, the opening track to The Beach Boys’ 1966 album ‘Pet Sounds’. With his fellow Californians, Pitman also performed on ‘The Beach Boys Today!’ and ‘Summer Days (And Summer Nights!!)’, both released in 1965.

Elsewhere, Pitman worked on a litany of film and TV soundtracks. His earliest contribution to cinema can be heard in Elvis Presley‘s 1961 film Blue Hawaii, while later accomplishments include scores for M*A*S*H (1970), Fast Times At Ridgemont High (1982), Dirty Dancing (1987) and Goodfellas (1990).

On the official Facebook page for the film, Tedsco shared a tribute to Pitman. “He was my dad’s friend who played guitar and golf with him,” he wrote. “It wasn’t until I got older did I understand the impact that he made. Bill could be heard from ‘Mr. Tamborine Man’ to ‘Good Vibrations’… He was an amazing man.”

The tribute was shared alongside a five-minute interview with Pitman that featured in The Wrecking Crew! that was filmed when he was 82 years old – watch it below:

We’ve lost another friend of ours last night. Bill Pitman has passed away. He was 102. Born on February 12, 1920Growing up, as a little kid, I always knew who Bill Pitman was. He was my dad’s friend who played guitar and golf with him. It wasn’t until I got older did I understand the impact that he made. Bill could be heard from Mr. Tamborine Man to Good Vibrations. Hundreds and hundreds of Film and television. He became the first call with the Danelectro guitar for many years. The interview I did with Bill for the WC Movie, he was 82 years young. He was an amazing man. Best to his wife Jan and his children. Jr. Salt, we will miss you. Say hello to Sr.

Pitman is survived by his wife Jan and their children.