HomeNewsThe Strokes’ Julian Casablancas: “I always wanted to be in the Arctic...
News

The Strokes’ Julian Casablancas: “I always wanted to be in the Arctic Monkeys” 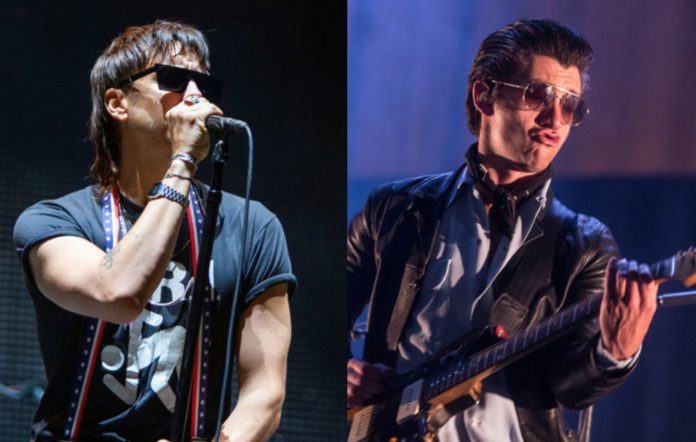 The Strokes‘ Julian Casablancas has admitted in a new social media post that he “always wanted to be in the Arctic Monkeys”.

READ MORE: Alex Turner loves The Strokes even more than you do – here’s how a certain bromance unfolded

The frontman took to Instagram this morning (October 10) to share a photo of himself recreating the cover art of the Sheffield band’s debut album, ‘Whatever People Say I Am, That’s What I’m Not’.

Released in 2006, the album’s iconic cover image features a black and white photo of Chris McClure – brother of Reverend And The Makers’ Jon McClure – smoking a cigarette.

Casablancas’ recreation of the famous artwork sees a similar close-up shot of him smoking, while the title tag in the left corner has been replaced with The Strokes’ logo.

McClure has since responded to the post, writing on Twitter: “Anyone who knows me will know of my love for The Strokes. So when I see @Casablancas_J posting a photo pretending to be me. It’s reeeeaaaalllllly mad!!!!!”

Anyone who knows me will know of my love for The Strokes. So when I see @Casablancas_J posting a photo pretending to be me. It’s reeeeaaaalllllly mad!!!!! pic.twitter.com/4rwgj1SUmN

Arctic Monkeys frontman Alex Turner has been very open and vocal about his love of The Strokes over the years, with the band covering ‘Is This It’ live in 2018 – as well as honouring them on ‘Tranquility Base Hotel & Casino’ track ‘Star Treatment’ with the lyric: “I just wanted to be one of The Strokes, now look at the mess you’ve made me make.”

“I remember I used to play that first album [‘Is This It’] in college all the time, when our band was first starting. Loads of people were into them, so loads of bands coming out sounded like them,” Turner told NME in 2011. “I remember consciously trying not to sound like The Strokes, deliberately taking bits out of songs that sounded too much like them, but I still loved that album.”

In August, it was reported that Arctic Monkeys had reportedly been recording a new album in Suffolk.

According to the website of Butley Priory, a venue just two hours from London on the Suffolk coast, the group were recording their next, seventh album there between June and July.

It comes after Arctic Monkeys drummer Matt Helders revealed in January that the group were in the “early stages of trying to write a [new] record”.

Speaking on Instagram Live on January 13, the drummer explained that the Sheffield band had been “faced with the obvious obstacles” while working on the follow-up to ‘Tranquility Base Hotel & Casino’.

“Being separated by the sea is one of them,” Helders said, referring to the travel restrictions that have been imposed due to the ongoing coronavirus crisis.

“We’re all eager to do it – we would have been doing it by now in a normal time. There’s definitely a desire from our end to do a new record as soon as we can.” Helders went on to say that he is “always tinkering on machines and synths” at his home in Los Angeles. “I’ve got drums here,” he said, adding: “[I’m] always trying to improve on and study certain things.”

The musician was photographed in a recording studio in October 2020, leading fans to speculate that new music could be on the horizon.

The band’s manager also revealed that the group had been “working on music” and had initially planned to record last summer.

“In this rather disjointed time, the guys are beavering away and I hope that next year they’ll start working on some new songs, new ideas, with a view on a future release,” explained Ian McAndrew.

The post The Strokes’ Julian Casablancas: “I always wanted to be in the Arctic Monkeys” appeared first on NME.