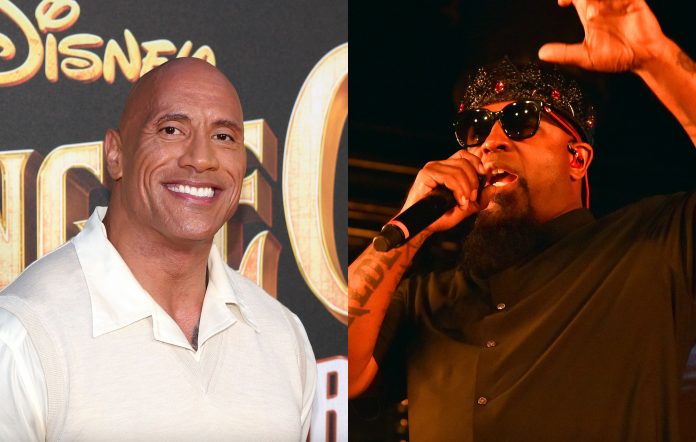 Tech N9ne (aka Aaron Yates) has dropped a fiery new single titled ‘Face Off’, which features – alongside striking guest spots from rappers Joey Cool and King Iso – the monolithic rap debut from Dwayne ‘The Rock’ Johnson.

Closing out the track with a short, yet unquestionably intense verse, Johnson snarls: “It’s about drive, it’s about power / We stay hungry, we devour / Put in the work, put in the hours and take what’s ours / Black and Samoan in my veins, my culture bangin’ with Strange / I change the game, so what’s my motherfuckin’ name?”

‘Face Off’ was shared alongside a film clip produced by Michael ‘Seven’ Summers, which stars all four of the track’s artists. Take a look at it below:

In an interview with Variety, Johnson explained that ‘Face Off’ wasn’t the first opportunity he’d been given to collaborate with a high-profile hip-hop artist, but he’d always rejected offers out of artistic integrity. He decided to break the chain when Yates texted him, however, because “we’re aligned, just in terms of our work ethic and desire”.

He continued: “When Tech and I first met years ago on the set of [HBO series] Ballers, we were talking about this idea about being the hardest worker in the room. He said something that I really appreciated: basically, ‘There could never be enough food in this room or on this set that could make me full because I always want to be hungry.’ I just love that.”

Yates told Variety that ‘Face Off’ was written with fighters in mind, describing it as an “energy song” and musing: “This is going to get people pumped up to lift weights, pumped up for fights, pumped up for the game. Period. And what better person? Not Conor McGregor. I don’t know him. I know The Rock.”

Yates also pointed out that Johnson wasn’t recruited to rap on the track, but instead “talk some real motivational stuff at [the] end”. Johnson insisted he deliver a full verse, writing it himself and structuring it with Yates over the phone.

The latter continued: “He’s so talented, man. To be able to get on a song with master MCs and be a master MC himself? Dwayne did his thing. He said he wanted to go fast like us. After what he did on ‘Moana,’ I could see he had the rhythm.”

According to Johnson, the part was recorded in a single take. “I was drinking Teremana, so I had already been a bit lit and was ready to go,” he said. “We sent it to Tech and his engineers and the text I got back from Tech, in all capital letters, was ‘Fuck yes!!!!’”

Fans shouldn’t expect Johnson to add a career in music to his ever-expanding schedule, as the actor, producer, businessman, and former WWE titan told Variety: “I never had the ambition to be a hip hop artist or a rapper, so the direct answer is no. But I did see an opportunity here to create a song that really inspired and motivated me to push for more and fight for more. I’ve always loved music. I love hip hop and blues and outlaw country music.”

He did, however, note that he would open to another collaborative opportunity, saying: “If the song is right and if the collaboration feels real and authentic, I would love that.”

‘Face Off’ landed on Friday (October 8) as the sixth track on Yates’ 23rd album as Tech N9ne, ‘ASIN9NE’. It comes as a follow-up to the rapper’s 2020 album, ‘Enterfear’, and also features guest spots from the likes of Lil Wayne, Marley Young and E-40.

Johnson recently made news for discovering an uncanny doppelgänger from Alabama, who himself described the comparison as “flattering” and said he’d “been called The Rock and Vin Diesel’s love child”.

Johnson’s film career is also blazing on, having recently starred alongside Emily Blunt in the Disney blockbuster Jungle Cruise. Later this year he’ll appear in the Netflix thriller Red Notice, sharing the screen with Gal Gadot and Ryan Reynolds.

Earlier this year, Johnson confirmed he had departed from the Fast & Furious franchise, and revealed that Blunt ghosted him when he first approached her to star in Jungle Cruise.

He also said he would consider a presidential run in the future, if it was “what the people wanted”. As of April, 46 per cent of Americans would consider voting for him in 2024.

The post The Rock makes his white-hot rap debut on new Tech N9ne single ‘Face Off’ appeared first on NME.