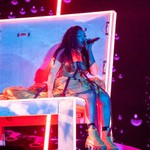 Last weekend’s Day N Vegas music festival boasted one of the most impressive lineups of the year. From Kendrick Lamar’s artful performance highlighting his decadelong legacy to Doja Cat’s showstopping set, proving herself as one of the most dynamic pop performers of the moment, the three-day musical experience had something for everyone.

But most noteworthy of all were the female R&B acts, delivering flawless vocal performances and captivating fans through their soul-baring serenades. While some fans were left wondering why a female act wasn’t selected to fill Travis Scott’s open slot, these powerful women performers slayed the stage all three days, reminding us why the genre remains an undeniable musical force. From Ari Lennox and Jazmine Sullivan’s powerhouse vocals, to SZA and Victoria Monet’s captivating dance moves, here are some of our favorite performances from this year’s female R&B acts.

Standing tall in a pair of strappy heels and draped in a flowy white dress with high slits, Ari Lennox captivated the audience during her vibey evening set. The relatable singer performed cuts from her 2016 debut EP, Pho, all the way to her latest single “Pressure,” made alongside R&B legends Jermaine Dupri, Bryan-Michael Cox and Johnta Austin. During her performance of “Backseat,” she brought out fellow Dreamville signee Cozz and sang an emotional rendition of “Whipped Cream,” which Lennox calls a “healing” song to perform. During the sensual “Up Late,” Lennox’s pitch-perfect vocals and thick vibrato took center stage, as the songstress serenaded an audience ready to receive everything she was serving up.

Known primarily for her otherworldly voice and melodies, Jazmine Sullivan’s “Pick Up Your Feelings” reverberated throughout the audience and beyond as she opened her Day N Vegas set. The performance doubled as a karaoke night, with much of the audience knowing every word to Sullivan’s setlist, including songs she released more than a decade ago. The “Girl Like Me” singer flashed a smile from ear to ear, shining brighter than her ankle-length iridescent trench coat. “All my crazy bi—es, make some noise,” she yelled, before transitioning into “Bust Your Windows.” Near the middle of her set, Sullivan offered a beautifully nostalgic rendition of The Fugees’ “Killing Me Softly” alongside her backup singers, before transitioning back into “Holding You Down (Goin’ in Circles).” The top-notch vocalist saved the best for last, closing out the set with her 2008 Missy Elliott-assisted single “Need U Bad.”

SZA has been working hard. The “Good Days” singer delivered a brilliant performance to an open-armed audience, who showered the songstress with love throughout her time onstage. The set drew a noteworthy crowd, causing festival organizers and SZA herself to have to issue multiple reminders for fans to step back due to overcrowding so she could continue serenading festival attendees safely. At one point, she debated performing “Love Galore,” her single alongside Travis Scott, finally saying “f— it” and singing the track, sans Travis verse, which was replaced by a verse of her own. During the hourlong show, SZA’s curious personality warmed fans, as she shared relatable anecdotes and at one point flashed her band a soul-snatching stare when they started her next song too early, reminding us of all the reasons we love her.

it’s the “ayeeee” from the crowd for me @VictoriaMonet pic.twitter.com/h6wtIKoCOK https://t.co/5rw4Bftyy7

Victoria Monet is a trending topic, thanks to her first ever festival performance. The “Ass Like That” singer delivered vocals, moves and energy, receiving all her flowers from in-person fans and the Internet. During a choreo break, she and her dancers gave a crowd-pleasing performance to Trillville featuring Cutty’s “Some Cut,” before transitioning into her 2020 single “Dive.”

On Sunday night, Teyana Taylor reminded festivalgoers why she’s one of the most energetic performers in the game. The multi-hyphenate artist was one of the final acts of the night, sharing a bittersweet performance marking her final tour before retirement. She didn’t bring daughter Junie out onstage, but Taylor and her dancers entranced the audience through flawless choreography, as her band executed seamless renditions of the Harlem native’s musical portfolio.