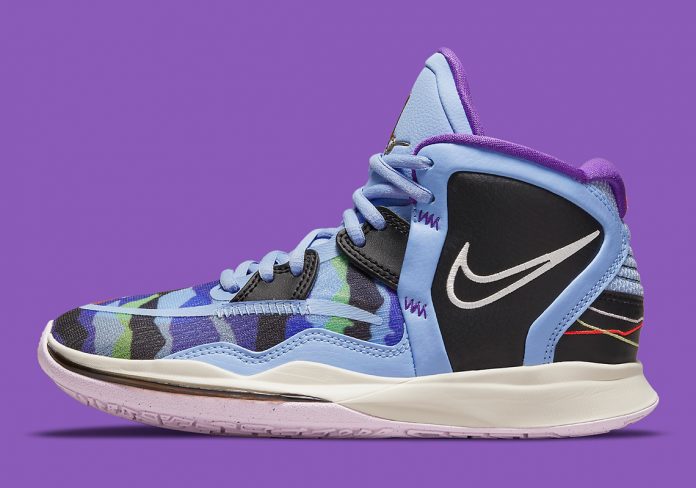 A brand new colorway of Kyrie Irving’s upcoming signature shoe has emerged with a multi-colored camouflage pattern seen on the engineered mesh on the upper. Above the mesh shell is a leather overlay and tongue in university blue and black, while purple lines the interior of the model. Unique stitch embroidery on the heel likely signifies an important aspect of Kyrie Irving’s life, while his insignia appears on the tongue via a metallic frame.

Some other interesting details have emerged regarding the name of the model. Apparently this fresh new silhouette will be referred to as the Nike Kyrie Infinity as the number 8 also matches the infinity symbol. Adding more dimension to the profound nature of the model is an alternate interpretation of the number 8 also appears on the right tongue.

Currently, a release date for the Kyrie 8 aka Kyrie Infinity is not known, although retailers have marked a November 20th release date (not this color). Regarding this particular pair, full family sizes are expected. Stay tuned for additional details and we’ll update you as we learn more.

The post The Nike Kyrie Infinity (AKA Kyrie 8) To Release In Multi-Colored Camo Patterns
appeared first on Sneaker News.

The post The Nike Kyrie Infinity (AKA Kyrie 8) To Release In Multi-Colored Camo Patterns appeared first on Sneaker News.