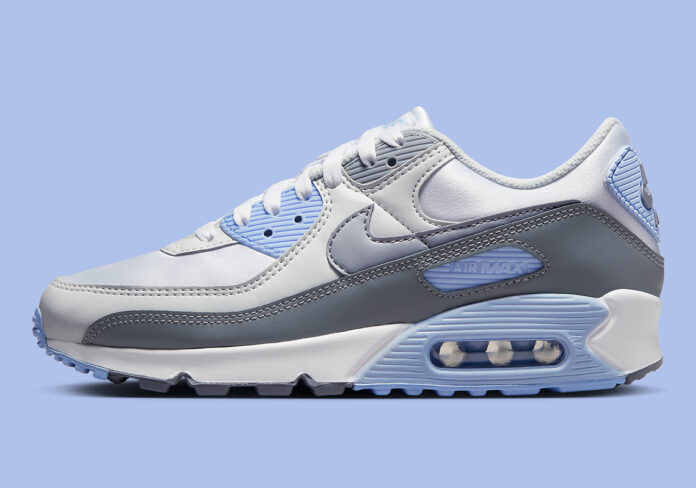 Continuing to serve as a pillar within the cushioned community, the Nike Air Max 90 has recently pursued an inline collection of greyscale compositions affixed with titular accents. For its latest outfit, the Tinker Hatfield design is coordinating a supple neoprene body with pulses of light baby blue.

Further diversifying the textile chosen to introduce the silhouette’s base layer, an ever so light blue infuses the latter mesh while its presiding leather overlays engage in a near-matching “Fog Grey”. Darkening the greyscale ensemble by pairing its medium grey midfoot Swoosh with the mainstay overlays “Shadow Grey” tint, faded blue hues with a lavender undertone accent the silhouette’s horizontally ridged embellishments and tongue tab branding. Concentrating the aforementioned contrast around the sole unit’s Air Max bubble, a crisp white midsole further brightens the neutral-toned effort in conclusion.

While we sit tight on further release details, enjoy official images of the Nike Air Max 90 “Blissful Blue” below in the meantime.

In other news from the Beaverton brand, the Air Jordan 11 is indulging in a “Neapolitan” scheme for Holiday 2023.