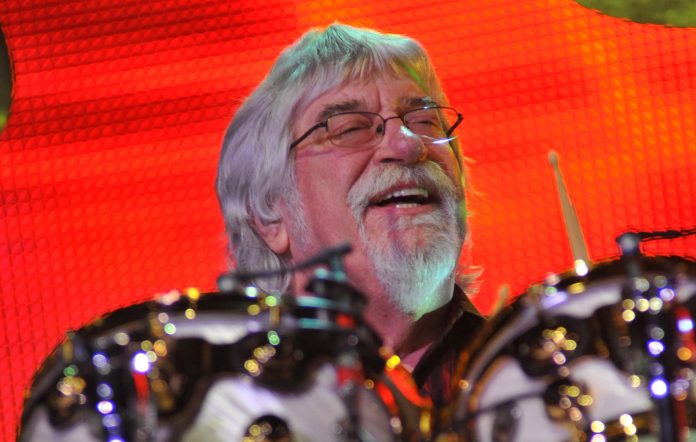 Graeme Edge, best known as the longstanding drummer, poet and founding member of prog-rock icons the Moody Blues, has passed away at age 80. No cause of death has been confirmed at the time of writing.

Edge’s passing was confirmed in a statement shared to the Moody Blues’ social media yesterday (November 11), with frontman Justin Hayward writing: “It’s a very sad day. Graeme’s sound and personality is present in everything we did together and thankfully that will live on.

“When Graeme told me he was retiring I knew that without him it couldn’t be the Moody Blues anymore. And that’s what happened. It’s true to say that he kept the group together throughout all the years, because he loved it.”

It’s a very sad day. Graeme’s sound and personality is present in everything we did together and thankfully that will…

Raised in the East Staffordshire village of Rocester, Edge formed the Moody Blues in 1964 alongside guitarist Denny Laine, bassist Clint Warwick, keyboardist Mike Pinder and flautist Ray Thomas. Edge remained with the band until his death, standing as the last founding member associated with it (the Moody Blues’ two current members, Hayward and bassist John Lodge, both joined in 1966).

Edge performed on all 16 of the Moody Blues’ studio albums (and is the only member to have done so), as well as ten live albums and three videotapes, and a suite of standalone releases. Among the band’s biggest hits were ‘Go Now’ – which topped the UK charts in 1964 – ‘Question’ and ‘Nights In White Satin’.

As well as its drummer, Edge contributed to the Moody Blues as a poet, penning ‘Morning Glory’ and ‘Late Lament’ for Pinder to narrate on their 1967 album, ‘Days Of Future Passed’. On the next year’s follow-up, ‘In Search Of The Lost Chord’, Edge made his own vocal debut with the opening poem ‘Departure’.

When the band went on hiatus in 1974, Edge formed his own project, The Graeme Edge Band. Alongside vocalist/guitarist Adrian Gurvitz and bassist Paul Gurvitz, the new act went on to release two studio albums: 1975’s ‘Kick Off Your Muddy Boots’ and 1977’s ‘Paradise Ballroom’. The Moody Blues reformed the following year, with Edge continuing his dual role as drummer and poet.

In 2018, Edge was inducted into the Rock and Roll Hall of Fame as a member of the Moody Blues. Outside of the band and his own project, Graeme was known to have an affinity for sailing, golf and science fiction, practiced transcendental meditation, and is often credited – alongside Sussex University professor Brian Groves – as the creator of the first electronic drum.

Paying tribute to Edge on Twitter, Lodge wrote that he considered the sticksman “the White Eagle of the North with his beautiful poetry, his friendship, his love of life and his “unique” style of drumming that was the engine room of the Moody Blues”.

Take a look at Lodge’s post, and more tributes, below:

I will miss you Graeme…. pic.twitter.com/3IxHq7oJHT

We are sad to hear that we lost Graeme Edge today. Great drummer! Our thoughts are with his family & friends.

Another of the greats, gone. Fare thee well, Graeme Edge.

Posted by Moonalice on Thursday, November 11, 2021