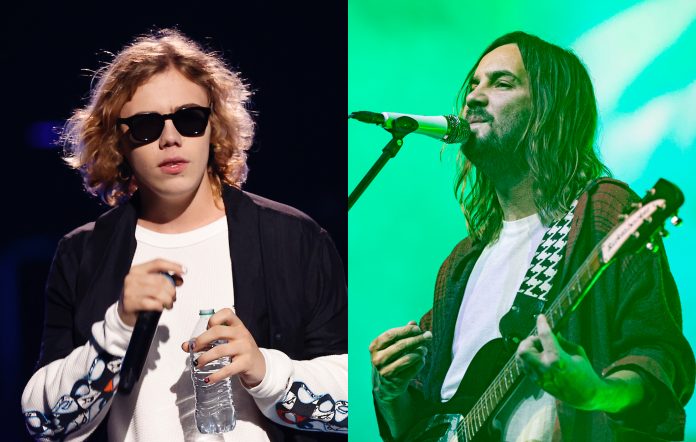 The Kid LAROI has teased a potential collaboration with Tame Impala, sharing two photos of himself in a recording studio with the psych-pop outfit’s frontman and primary songwriter, Kevin Parker.

READ MORE: The Kid LAROI at Reading Festival 2021: a tyke fooling around in his playpen

The photos were shared to LAROI’s Instagram Story overnight (October 12), neither offered with any context. Both photos show the pair sitting in front of a mixing console, with the first captioned with emojis for a pill, a police car, a couple and a glass of whiskey.

LAROI is currently working on his debut full-length album, expected for release in 2022. The rapper confirmed last week that he also has several other projects in the pipeline, including one that will explore the origins behind his artist name, a nod to his mother’s Indigenous roots as a member of the Kamilaroi tribe.

Back in July, he released ‘F*ck Love 3: Over You’, the third instalment in a trilogy of mixtapes following ‘F*ck Love’ in July 2020 and ‘F*ck Love (Savage)’ that November. The latest mixtape featured LAROI’s smash-hit Justin Bieber collaboration, ‘Stay’, as well as a Polo G collab titled ‘Not Sober’. It was followed a week after release with an expanded edition.

Earlier in the month, LAROI made his awards show debut at the MTV Video Music Awards, where he and Bieber performed ‘Stay’. Speaking to NME, LAROI said he “actually never asked [Bieber] how he found my shit. He just DM’d me one day on Instagram and was just like, ‘You got the sauce’, and I responded back and was like, ‘Yo, what’s up? I’m a big fan’. He liked my message and that was it from there.”

LAROI’s potential collab with Tame Impala would come as the latest in a string of team-ups that Parker has worked on in 2021. At the start of the year, Internet Money founder Taz Taylor said he’d been working with Parker over FaceTime.

Back in June, Parker hinted that a track he and Mark Ronson worked on with SZA could be released in the near future, after it was debuted live in 2017. Then in October, Diana Ross said that Tame Impala would appear on a track for her upcoming album ‘Thank You’.

Last month, Tame Impala played their first full-band live show in 18 months, treating fans in Chicago to a 20-song set that included a cover of Travis Scott‘s ‘Skeletons’. The band are currently in the midst of a sprawling US tour in support of ‘The Slow Rush’, where proof of either full vaccination or a negative COVID test are required for entry.

‘The Slow Rush’ was released last February via Modular, and was supported by singles like ‘Borderline’, ‘Posthumous Forgiveness’, ‘Lost In Yesterday’, and ‘Is It True’. The band also released an 18-minute reimagining of the album’s opening cut, ‘One More Year’.

In a four-star review, NME writer Thomas Smith praised ‘The Slow Rush’ as an evolution of Tame Impala’s sound, saying the band were “unlikely to lose any fans by embracing Parker’s pop sensibilities – genres are history, man – but you have to admire their wilful desire to push into new directions”.

Speaking to NME ahead of the LP’s release, Parker spoke of the fantastical element of Tame Impala, saying: “I’ve always considered Tame Impala as a thing that people can use to escape from whatever the physical strains and problems in their life are. Tame Impala is the fantasy [fiction] of music. It’s The Lord Of The Rings.”