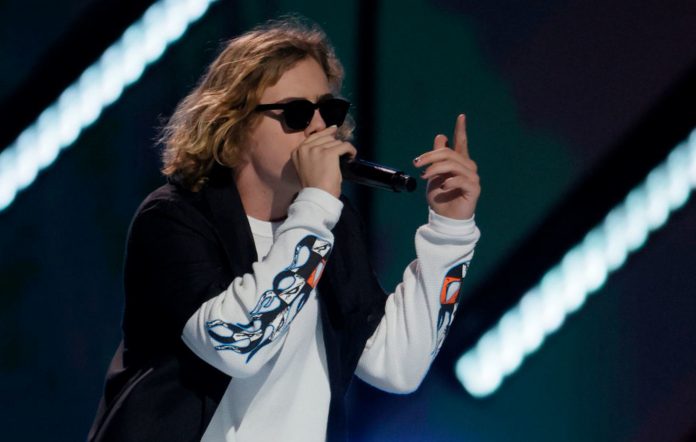 The Kid LAROI has been awarded Artist Of The Year at this year’s National Indigenous Music awards.

LAROI’s recognition comes after a big year that saw him drop two extended editions of his ‘F*ck Love (Savage)’ project, which feature his Justin Bieber collaboration ‘Stay’, which recently logged 10 weeks at Number One on Billboard’s Pop Airplay chart.

This year’s NIMAs were originally scheduled for August at the Darwin Amphitheatre but was cancelled due to the coronavirus pandemic. Instead, they were broadcast via triple j, Double J and triple j Unearthed as well as being available to First Nations community radio stations via The National Indigenous Radio Service.

You can see the full list of winners below:

Artist Of The Year: The Kid LAROI

Song Of The Year: Miiesha – ‘Damaged’

The NIMAs also celebrated the life and vastly important work of Indigenous musician Kev Carmody, inducting him into the Hall of Fame as part of the 2021 award ceremony.

“I’m absolutely so proud, humbled and honoured to accept the award on behalf of all of us. Past, present and of course future, because it’s a collective way of thinking in my opinion, that we all go together and no one gets left behind,” Carmody said upon his induction.

“I’m so proud of the young ones! It might be rap, it might be hip-hop, it might be reggae; we’re still expressing [ourselves] through the oral cultural traditions, which is songs and storytelling, it’s just in a musical sense. I’m so proud of our young mob with the music, and with dance – that’s an interpretation too – and art. That’s our way of passing on our oral tradition and I think it’s fantastic. I can sit back now. I’ve played my four chords and that’s it.”

LAROI is currently working on his debut full-length album, expected for release in 2022. The rapper confirmed earlier this month that he also has several other projects in the pipeline, including one that will explore the origins behind his artist name, a nod to his mother’s Indigenous roots as a member of the Kamilaroi tribe.

Last month, he teased a potential collaboration with Tame Impala, sharing two photos of himself in a recording studio with the psych-pop outfit’s frontman and primary songwriter, Kevin Parker.

Neither offered any context, but both photos show the pair sitting in front of a mixing console, with the first captioned with emojis for a pill, a police car, a couple and a glass of whiskey.

Meanwhile, The Kid LAROI has parted ways with Scooter Braun’s SB Projects after less than four months with the management company.

The rapper moved from previous representation A Grade Projects to Braun’s SB Projects in early June, a month before releasing hit single ‘Stay’ with Justin Bieber, who Braun has managed since early in the pop star’s career.

Billboard reports that the split was “amicable”, and that LAROI is now being represented by veteran artist manager Adam Leber, whose Rebel Management company also counts Lil Nas X and Labrinth among their current clients.

The post The Kid LAROI takes home Artist Of The Year at 2021 National Indigenous Music awards appeared first on NME.