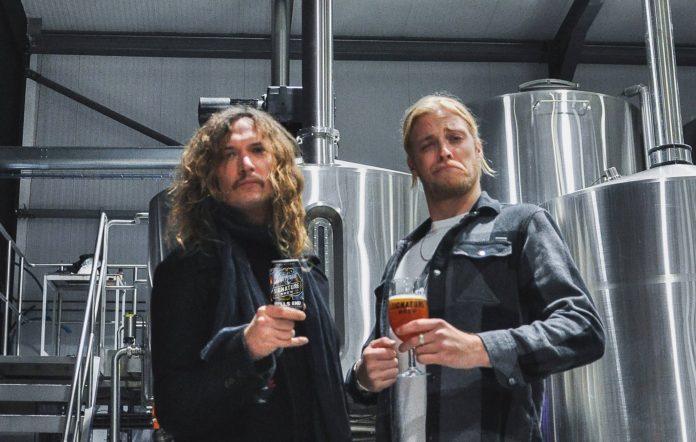 The Darkness have launched a beer named after their festive single ‘Christmas Time (Don’t Let The Bells End)’.

The band have teamed up with London’s Signature Brew for their own brand of bitter which comes in a limited box edition entitled ‘Pub in A Box, Bells End Edition’.

It includes four cans of The Darkness’ ‘Bells End’ beer, limited-edition glassware, a beer mat and art print, plus snacks, a Spotify playlist and a pub quiz.

It is priced at £30 and can be purchased here. You can view an unboxing of it below.

Rejoice! Bells End is BACK! Our mouthwatering, limited edition beer with our friends at @SignatureBrew returns just in time for Christmas : https://t.co/Q3ngmdX2Uv pic.twitter.com/PhGxg3dTBm

According to a press release the beer itself is described as having “a mouth-watering bitterness to carry you through the season. On pouring out the brew, you’ll find a clear, deep copper beer with a medium-low carbonation; on the nose is a little stone fruit, toffee and light, earthy hops and you’ll be greeted with wintery and wild, spicy blackcurrant fruitiness and a firm bitterness which balances the complex rich, sweet toffee flavours of the malt.”

Speaking about the bitter, guitarist Dan Hawkins said: “The tasting session for Bells End went well, it was a big night, and we tried every ale that we could think of. We wanted a beer that’s punchy and drinkable at the same time.

“Signature Brew really know their stuff and captured exactly what we were after. Bells End has got a bit of oomph to it but it’s something you can drink in the run up to Christmas and throughout the whole season. It’s a very wintery beer, it’s perfect and we can’t wait for everyone to try it.”

The band recently released their new album, ‘Motorheart’. They are currently in the middle of a UK tour, which wraps up next month.

Speaking about the tour frontman Justin Hawkins recently said: “The time has come, the walrus said…to put your fookin pants on your head and rock like Satan is eating your private parts with a pointy fork! Yes, we, The Darkness, are the fuck back on tour, praise Satan’s better half…come and party with us like it’s the last orders at the last chance saloon.”

The Darkness’ remaining tour dates are: