HomeMusicThe Beatles’ ‘Let It Be’ Returns to Billboard Charts After Special Edition...
Music 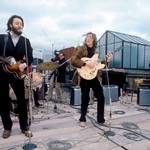 The Beatles’ Let It Be surges back onto the Billboard 200 albums chart (dated Oct. 30), re-entering at No. 5 following its deluxe special edition reissue on Oct. 15. The set was first released in 1970 as the final studio effort from the band, and also doubled as the soundtrack to the documentary film of the same name. The album spent four weeks atop the Billboard 200 (June 13 – July 4, 1970-dated charts) and is one of a record 19 No. 1 albums for the group.

For its special edition, the album was reintroduced in a variety of expanded formats and editions, including many with previously unreleased tracks. All versions of the album, old and new, are combined for tracking and charting purposes.

The Billboard 200 chart ranks the most popular albums of the week in the U.S. based on multi-metric consumption as measured in equivalent album units. Units comprise album sales, track equivalent albums (TEA) and streaming equivalent albums (SEA). Each unit equals one album sale, or 10 individual tracks sold from an album, or 3,750 ad-supported or 1,250 paid/subscription on-demand official audio and video streams generated by songs from an album. The new Oct. 30, 2021-dated chart (where Let It Be re-enters at No. 5) will be posted in full on Billboard’s website on Oct. 26. For all chart news, follow @billboard and @billboardcharts on both Twitter and Instagram.

The Let It Be reissue also makes waves on other Billboard album charts. It re-enters at No. 1 on Top Album Sales, Catalog Albums, Soundtracks and Tastemaker Albums – marking its first week atop all four charts.*

The Let It Be reissue precedes the arrival of director Peter Jackson’s upcoming documentary series The Beatles: Get Back. The three episodes will premiere, respectively, on Nov. 25, 26 and 27 exclusively on Disney+.