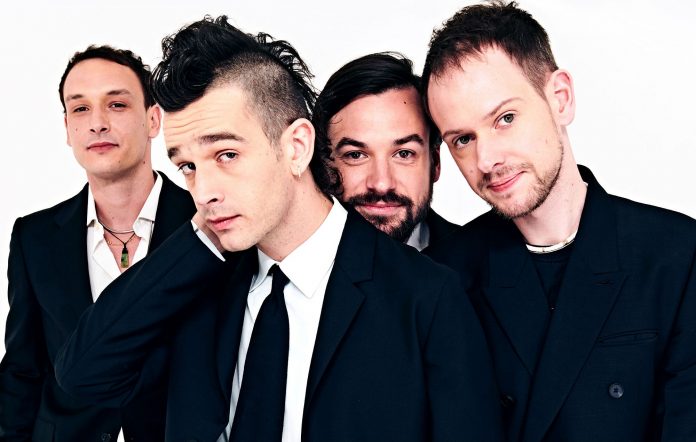 The 1975 have teamed up with climate change organisation Music Declares Emergency for a new charity t-shirt – see the design below.

The organisation’s No Music On A Dead Planet campaign has previously been backed by the likes of Billie Eilish and Foals, while shirts have been designed by Thom Yorke, Joy Division artist Peter Saville and others.

The 1975’s design, which comes in black and white t-shirt variations as well as on a white hoodie, is based around their rectangle logo, bearing the ‘No Music On A Dead Planet’ slogan alongside the words: “The 1975 for MDE.”

It comes after the band helped fans recycle their old t-shirts by screenprinting new 1975 logos on them at a pop-up shop at Reading Festival in 2019.

Speaking of the collaboration, the band said: “This November, the fate of the planet will be decided at COP26, The UN Climate Change Conference. We are proud to be supporting Music Declares Emergency and their #NOMUSICONADEADPLANET campaign as they fight to ensure a greener future for all.”

See the designs below and order your t-shirt here.

This week, Brian Eno has spoken about Coldplay and The 1975‘s efforts to tackle climate change, while calling for “a revolution” in the wider music industry’s approach.

The renowned musician/producer appeared as a guest on the second season of the Sounds Like A Plan podcast, hosted by journalist Greg Cochrane and Music Declares Emergency co-founder and Savages drummer Fay Milton.

Speaking to NME about the organisation’s goals in 2019, Milton said: “There’s such a short period of time to make the changes we need to make, and to make people wake up and realise that there isn’t time for everyone to change everything they do.

“To use Greta Thunberg’s analogy, the house is on fire, and there isn’t time for whoever started the fire with their cigarette to quit smoking before saying the house is on fire – it’s on fire now, and we need to fix this. Let’s change our lifestyles, let’s fly less, let’s use less plastic – but ultimately what’s needed is a governmental response.”