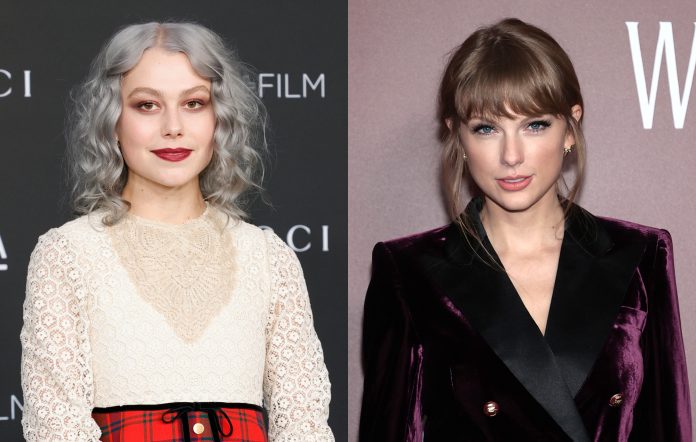 Taylor Swift has recalled the moment she reached out to Phoebe Bridgers to ask her to collaborate on ‘Red (Taylor’s Version)’.

Yesterday (November 12) Swift released a re-recording of her 2012 fourth album, which arrived with a series of “From The Vault” tracks.

Bridgers appears on the song ‘Nothing New’, with Ed Sheeran and Chris Stapleton contributing to ‘Run’ and ‘I Bet You Think About Me’ respectively.

During an interview on Late Night With Seth Meyers, Swift hailed Bridgers as “one of my favourite artists in the world”, adding: “If she sings it, I will listen to it. I just love her voice.” She then explained how her team-up with the ‘Punisher’ musician came about.

“I try not to cold-call people. It can go very bad,” Swift said. “But I do send a very long text that I’ve crafted over many days. And I’ll send the song because I don’t want them to ever feel pressured to say yes to something, creatively, if it doesn’t gel with what they want to do.

“With Phoebe, I reached out and I sent her this song called ‘Nothing New’, which I wrote when I was 22.”

She continued: “And it’s really, really special to me because it was the first time I was not a shiny new artist. I sent it to Phoebe and said, ‘It would mean the world to me if you would do this as a duet’. ‘Cause I really wanted another female artist who I loved to sing it with me because I think it has a very female artist perspective that we go through that experience.”

Swift concluded: “And her response was, ‘I’ve been waiting for this text my entire life’. It was like, ‘Yes!‘ [Laughs].”

Bridgers later shared a clip of the conversation on Twitter, writing: “True story.”

Elsewhere, Bridgers recalled how she became emotional while recording her vocals for ‘Nothing New’. “It’s just been a dream,” she said. “I just am so excited to have people take it at face value the day that it comes out, because I got teary recording it. I just couldn’t be more excited.”

Upon the album’s release yesterday, Bridgers tweeted: “I was 18 when ‘Red’ came out. How is this real.”

Swift is remaking her first six studio albums – up to and including 2017’s ‘Reputation’ – following the controversial sale of her masters in recent years. The star released ‘Fearless (Taylor’s Version)’ in April before sharing a re-recording of ‘1989’ single ‘Wildest Dreams’ in September.

‘Red (Taylor’s Version)’ came with an accompanying short film based on the new 10-minute version of ‘All Too Well’. Written and directed by Swift, the project stars Stranger Things‘ Sadie Sink and Maze Runner‘s Dylan O’Brien.