HomeNewsTame Impala plays ‘She Just Won’t Believe Me’ for the first time...
News 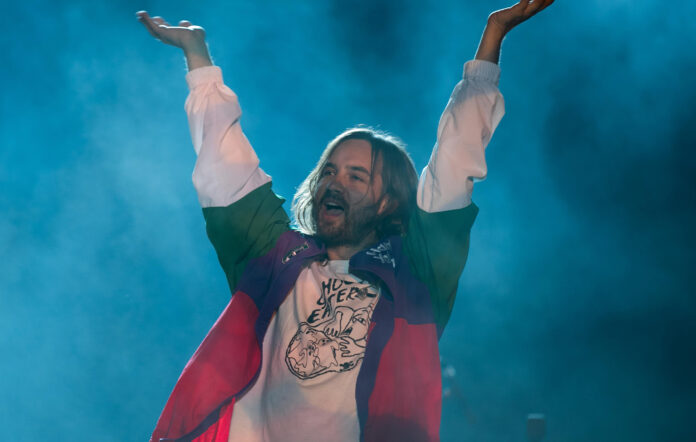 Tame Impala kicked the month off with a headline set at the Desert Daze festival in Perris, California, where they celebrated 10 years of ‘Lonerism’ by performing it in full.

All of those songs received an emphatic reception at Desert Daze, as did some of the album’s lesser-played cuts. Opening track ‘Be Above It’, for example, was performed for the first time since August of 2015, with ‘Music To Walk Home By’ also returning to the set after a six-year hiatus.

‘She Just Won’t Believe Me’ was also performed for the first time ever, too, and album closer ‘Sun’s Coming Up’ received its first play-through – with an extended jam to close it out – since December of 2010.

Have a look at the entire set, shot from the crowd, below:

Upon its 2012 release, ‘Lonerism’ earned four-and-a-half stars from NME. In his review, Dan Stubbs wrote: “Sounds phase in and out, drums thunder, guitars chime with warm, valve amp bite, voices are multi-tracked into luscious harmonies, snatched sentences of speech burble in the background, loops repeat and vocals echo distantly, like they’re drifting in from a radio in another room.”

Reviewing them more recently – at the All Points East festival in August – NME’s Hannah Mylrea wrote that Tame Impala’s set “truly showcases [their] live experience, with focus on both an intoxicating, bombastic show and the megalithic live force that Kevin Parker’s musical outfit have become”.

Tame Impala are currently on tour in support of their fourth album, ‘The Slow Rush’, which arrived in February of 2020 and earned four stars from NME. Their final leg will take them to their native Australia – following a one-off gig in Auckland, New Zealand on Saturday October 15 – with shows in Brisbane, Sydney, Melbourne, Adelaide and Perth planned for this month. See all the dates and find tickets here.

Meanwhile, the band recently teamed up with Gorillaz for the single ‘New Gold’, dropped a remix of Elvis Presley‘s ‘Edge Of Reality’ for the Elvis biopic soundtrack, and shared their collaboration with Diana Ross, ‘Turn Up The Sunshine’, on the Minions: The Rise of Gru soundtrack.

The post Tame Impala plays ‘She Just Won’t Believe Me’ for the first time at ‘Lonerism’ anniversary show appeared first on NME.