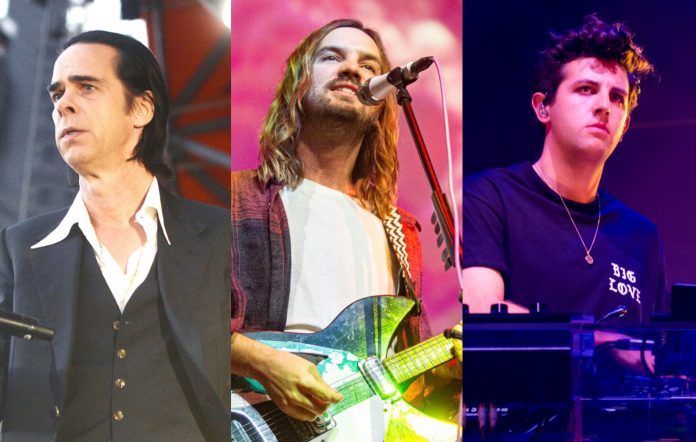 They will be joined by support acts including Jehnny Beth, Aurora, Diiv, La Femme, The Blaze, FKJ, Los Bitchos, Malik Djoudi and The Limiñanas.

The Paris festival will take place across four days – an extension to the normal three day event – between August 25-28 2022 at the Domaine National de Saint-Cloud. You can buy tickets for the festival here.

The festival is returning after a two year absence following the coronavirus pandemic and organisers say the extra day for next year’s event will help to make up for “lost time”.

You can see the full line-up so far here:

Jim King, CEO of European Festivals at AEG Presents, says of the festival’s return: “It’s very exciting to announce the return and a new vision for Rock en Seine, with one of the most impressive line ups in the history of the festival. Headliners Stromae, Tame Impala and Nick Cave and the Bad Seeds will be joined by a deep supporting line up including Kraftwerk and Jamie xx.

“To match this incredible line up, the new format for the festival sees it grow to 4 days. Paris has always provided a cultural heart beat in Europe and with its incredible city centre location in the beautiful gardens of Saint Cloud on the banks of the River Seine, Rock en Seine provides 4 days of music in one of the World’s truly great cities that is easily accessible for music fans from all over Europe.”

“We are very proud of the tremendous talents we’re announcing, and the exclusive surprises we keep for future announcements. More than ever, we aim to be one of the unmistakable rendezvous for all French and European live music fans.”

Earlier this week, Nick Cave & The Bad Seeds shared a new live version of their 2013 track ‘Push The Sky Away’, which was recorded with the Melbourne Symphony Orchestra – listen to it below.

The song, which was recorded live in 2019 as part of the ‘Film Music – Nick Cave & Warren Ellis’ event at the Hamer Hall in Melbourne, will appear on the band’s ‘B-Sides & Rarities Part II’ album which is set to come out on October 22.

“I never had more fun on stage than with the MSO…” Cave said of the experience, while Warren Ellis called the event “one of the best shows of my life”.