HomeNewsT.I. confirms he punched The Chainsmokers’ Drew Taggart in the face over...
News

T.I. confirms he punched The Chainsmokers’ Drew Taggart in the face over kiss 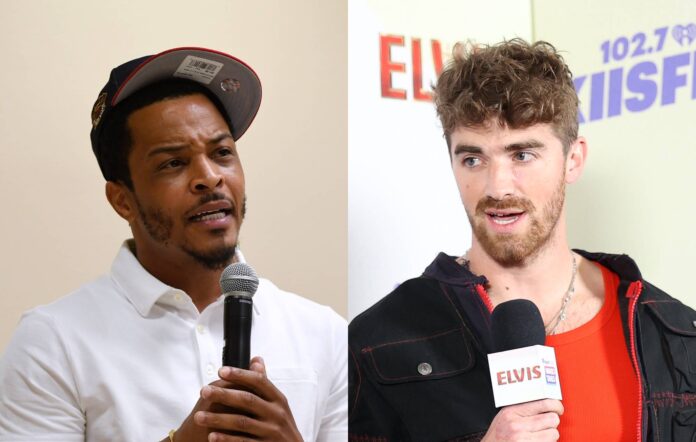 T.I. has responded to The Chainsmokers singer Drew Taggart’s claim that he was struck in the face by the rapper after giving him a kiss on the cheek.

“T.I. just literally punched me in the face,” Taggart said in a clip posted on TikTok yesterday (August 16) that shows the duo performing at a nightclub alongside T.I. and others. “We’re in a vibe and I, like, gave him a kiss on the cheek. It was totally my fault,” while Taggart’s Chainsmokers bandmate Alex Pall can be heard laughing in the background.

Taggart added that the rapper was quick to move on from what had happened. “He was like, ‘Alright cool, we’re good.’ It was the weirdest interaction ever,” the singer explained.

“First of all, T.I.’s fully in the right here. I was feeling the vibes way too hard and I kissed T.I. on the cheek. And he punched me in the face for it! It’s like, fully fine,” Taggart concluded.

T.I. has since shared his own video stating that there “isn’t that much more to the story that you’ve already heard” that Taggart told, but added that he loved The Chainsmokers.

“They make great music,” he said in the clip. “I think the important thing to take away is that afterwards, we had a drink, we took a shot, you know what I’m saying? And we moved on.”

Appearing at the festival, DaBaby told the crowd: “If you didn’t show up today with HIV, AIDS, any of them deadly sexually transmitted diseases that’ll make you die in two or three weeks, put your cellphone light up.”

Posting a video in support of DaBaby, T.I. said: “For instance, the Lil Nas X shit. The performances and video, man I got a lot of respect for bruh because he had the courage to live his truth, but that shit ain’t for me… Just can’t look at it… And I don’t want my children seeing it, either,” he said.

He expanded on that comment later on in the video, saying: “If you have a Lil Nas X video, and him living his truth, you gone damn sure have people like DaBaby who are going to speak they truth. There ain’t nothing wrong with none of that. It ain’t got to be no hate, it’s all honesty.”

The post T.I. confirms he punched The Chainsmokers’ Drew Taggart in the face over kiss appeared first on NME.