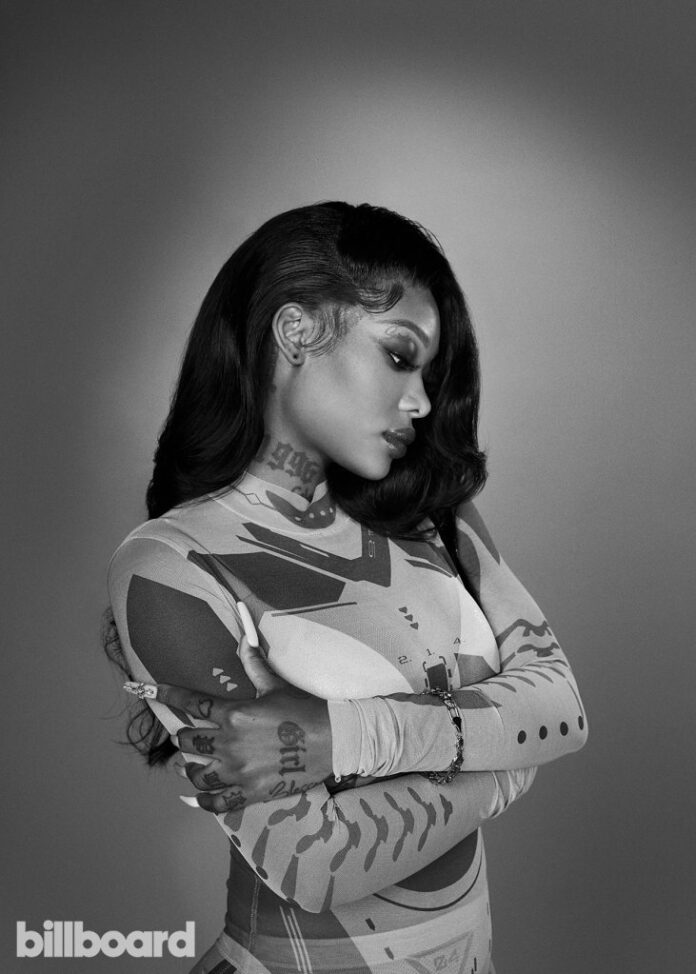 Summer Walker is not one to pour her heart out in an Instagram caption. The taciturn Atlanta native communicates the way she knows best: by squeezing every tragedy and triumph into buttery-smooth R&B songs. Her second album, last year’s Still Over It, sounds like a diary — 20 tracks full of brutally honest lyrics along with personal messages from Ciara and Cardi B, doling out sisterly advice.

That vulnerability has paid huge dividends: Still Over It debuted at No. 1 on the Billboard 200, landed all 18 of its eligible tracks on the Hot 100 and set the record for the biggest streaming week for an R&B album by a female artist in the United States. But for Billboard’s 2022 Women in Music Chart Breaker recipient, getting the chance to express herself is more than enough. “I don’t really talk to many people, so I just tell my business in my songs so I can get it out. It’s not really like, ‘Oh, yeah, hope this one hits the charts!’ ” the 25-year-old says with a laugh while her infant daughter — known only to fans as “Bubbles” — coos in the background. Walker has come a long way since she was a 17-year-old recording guitar covers for YouTube in her bedroom, but for her, music still serves the same purpose: “It’s just therapy for me.”

What are you most proud of accomplishing in the past year?

Why do you think Still Over It resonated with so many people?

Because collectively, n—as ain’t s–t. We can all agree on that.

In 2019, you canceled the bulk of your tour dates for mental health reasons. How are you feeling about your upcoming shows?

I feel the same about performing: I don’t like it. But I have noticed myself wanting to do more, like a bigger set design. I find myself putting my own input into my sets and videos. I usually just be like, “All right, whatever y’all want to do, you can do it. I don’t care.” I’ve taken a little bit more pride in my craft. Now I have an opinion about everything. For Still Over It, it’s such a fresh wound, I just want to make sure the story is portrayed properly. I don’t want anyone to misconstrue my feelings.

Summer Walker photographed on Oct. 26, 2021, at Ambient+Studio in Atlanta.

While your first two albums focused on trap-R&B sounds, your 2019 EP, Clear, was much more stripped back. Would you ever return to that?

Oh, for sure. I am hella excited to do Clear 2. The last one was like four songs. This one — I want it to be a lot longer so I can really get that sound out. That’s my favorite type of sound. I make what I got to make for the radio, but I’m very excited for [Clear 2]. Hopefully, my budget will be permitted. [If not], we got to protest. (Laughs.)

If you could spend the entire day doing something aside from music, what would it be?

The entire day? What would I do? I would just want to go to Dubai. I don’t think that’s the right answer. (Laughs.) I just want to travel and see nature — like mountains in Switzerland, s–t I’ve never seen. [Nature] brings me peace of mind. I’m really obsessed with it. I’ll be following all these pages that show nature places, and the s–t looks so crazy that it looks edited or fake, but it’s really real. I just want to see that if I ever get the chance. There’s so much to see, and I’ve never seen none of it.

Share
Facebook
Twitter
Pinterest
WhatsApp
Previous article
K-Pop Supergroup GOT the beat on Joining Forces: ‘We Clicked Right Away’
Next article
Big Time Rush Get Into the Business of Love in ‘Not Giving You Up’ Video