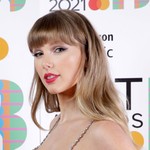 Everything’s coming up red. In addition to Taylor Swift dropping the highly anticipated Taylor’s Version of her beloved Red album on Friday (Nov. 12) coffee emporium Starbucks announced an official deal with the singer on a red-themed holiday treat. After teasing a possible mochallaboraion earlier this week, Starbucks made it official with a number of ways to celebrate red cup season.

Beginning Friday, Swifties can enjoy’s Tay’s favorite drink, a Grande Caramel Nonfat Latte by telling their barista that they’re looking for “Taylor’s Latte” or “Taylor’s Version”; you can also go to the Starbucks app, tap the details in the Taylor app card and click “order now.”

But wait, there’s more. Starbucks also announced that you’re likely to hear Red (Taylor’s Version) and some other Swift hits at your local Starbucks store and you listen to their themed playlist anywhere starting today on Spotify.  You can also spread the love by sending a beverage to a friend with an exclusive Taylor-inspired Starbucks e-gift.

Earlier this week, eagle-eyed Swifties began to suspect something was up when the coffee chain tweeted out “It’s Red Season,” along with coffee, sparkle, scarf and heart emoji, parroting the same phrase the singer recently used in her first Instagram Reel video in which she declared this to be “Red Season.”

Coincidence? Not in Swiftland. The java giant doubled-down in replies with the Swiftie-baiting teases, writing, “We know all too well how exciting this time of year is, and we’ll forever & always love it. Our red holiday cups and drinks are back!” Starbucks traditionally rolls out red cups during the holidays, but their use of the Taylor song titles “All Too Well” and “Forever & Always” in their reply suggested there might be more than meets the eye.

Starbucks then tripled down, quoting lyrics from “Holy Ground” and “Begin Again” in other tweet replies and dropping more crumbs by quoting a Swift Insta caption with “We’re just in a holiday vibe right now, not a lot going on at the moment otherwise.” Swift got in on the action on Oct. 26 Insta, getting ready for fall by modeling a scarf and other fall fashions while gulping down some Starbucks.

Share
Facebook
Twitter
Pinterest
WhatsApp
Previous articleTaylor Swift Promises To Sing on ‘SNL,’ If Bowen Yang and Aidy Bryant Will Let Her
Next articlePlacebo on pushing the boundaries of gender and sexuality in the ‘90s