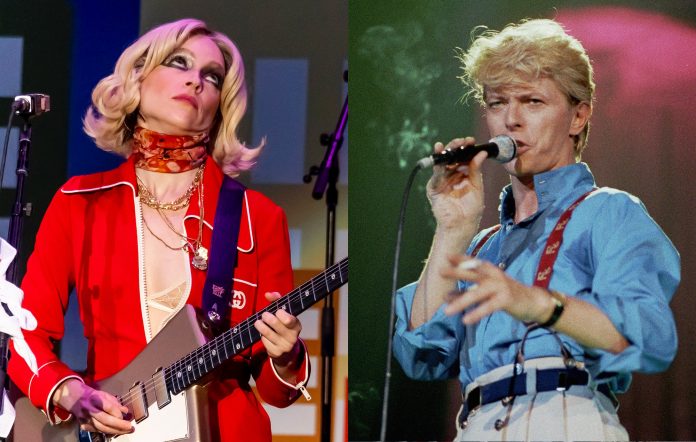 Peloton have announced that David Bowie’s full discography will be made available on its line of exercise equipment, with the addition of three exclusive remixes by St. Vincent, Honey Dijon and TOKiMONSTA.

For her inclusion in the bundle, St. Vincent (real name Annie Clark) took on Bowie’s 1980 track ‘It’s No Game (No. 1)’. In a press release, Clark said she chose the track – which first appeared on Bowie’s 14th album, ‘Scary Monsters (And Super Creeps)’ – because “it has a part 2 on the record, and I figured maybe Bowie wouldn’t mind so much if I made a part 3.”

“I wanted to take Bowie’s throat-shredding vocal take from part 1, and make it front and center. ‘Three steps to heavaaaaaaaaaaaahn…’”

Honey Dijon, on the other hand, took a crack at the title track from Bowie’s 1983 album ‘Let’s Dance’. “When I was asked to remix one of my favorite David Bowie songs,” she said, “I chose ‘Let’s Dance’ because it’s a true celebration of music and movement – just like Peloton!”

Rounding out the trio is TOKiMONSTA’s take on the 1975 track ‘Golden Years’, which fans will know best as the lead single of Bowie’s ‘Station To Station’ LP. In her statement, the DJ (real name Jennifer Lee) said: “To me, I connect with Bowie as an amazing innovator.

“He was always reinventing himself and pushing the envelope of music, while somehow never ceasing to be authentically himself. His experimental fashion choices are always a beacon for me to challenge my style and look.”

Check out a teaser for The David Bowie Collection below:

The David Bowie Collection will be available for Peloton App users starting Wednesday (January 19), alongside a series of boutique workout classes developed to be soundtracked by Bowie’s hits. It comes in belated celebration of the late art-rocker’s 75th birthday, which fans around the world celebrated in his honour on January 8.

Elsewhere, BFI Southbank are currently underway with their monthlong celebration of Bowie, titled Bowie: Starman And The Silver Screen. The installation includes screenings of feature films, documentaries and television appearances featuring Bowie, ranging from The Man Who Fell To Earth and Labyrinth to Bowie At Glastonbury 2000.

Earlier this month, it was announced that Bowie’s estate sold the legendary singer’s publishing catalogue to Warner Chappell Music, for a price reported to be upwards of $250million (£186million).

The news was followed by two previously unreleased versions of the 1970 song ‘Shadow Man’, released by ISO Records and Parlophone as part of a box set reissue of Bowie’s ‘Toy’ album.