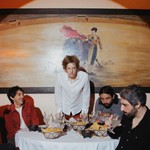 Spoon announced the release date for their upcoming 10th album on Thursday (Oct. 28), Lucifer on the Sofa, which will drop on Matador Records on Feb. 11. The Texas group previewed the collection with the chugging rocker “The Hardest Cut,” which was co-produced by the band and Grammy-winner Mark Rankin (Adele, Iggy Pop). The video for the song features the band playing it live at a raucous house party with a Halloween-appropriate sub-story about a knife-wielding killer preparing to off his latest victim.

“It’s the sound of classic rock as written by a guy who never did get Eric Clapton,” singer/guitarist Britt Daniel said in a statement about the first album the five-piece has recorded in their hometown of Austin in more than a decade. In describing the hard-charging sound of “Hardest Cut,” co-written by Daniel and keyboardist Alex Fischel, the singer said, ““I spent a lot of 2018 and 2019 listening to ZZ Top.”

In addition to Rankin, the album features contributions from frequent Flaming Lips collaborator producer Dave Fridmann and producer/engineer Justin Raisen (Angel Olsen, Charli XCX). Fans can listen to “Hardest Cut” and more songs from the new album and the band’s catalog of hits on Thursday and Friday (Oct. 29) night by tuning into Back to the Life/Live From Los Angeles here.

Watch the video for  “The Hardest Cut” and see the full Lucifer track list below.

“Lucifer On the Sofa”