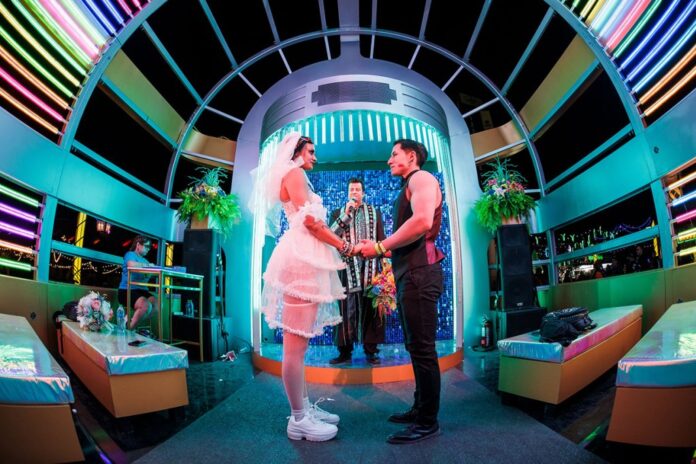 For the past 11 years in Las Vegas, beyond the gratifying wobble of soul-shaking bass and its laser-lit night skies, Electric Daisy Carnival has been home to over the top dance floors, inimitable vibes and life-affirming experiences.

Both on the Las Vegas Motor Speedway and throughout the city, crowds gather, limbs flail and the music that draws so many together becomes the glue that keeps some of us holding on the rest of the year. And despite the public-health hiatus EDC took during the pandemic, 2022 was no exception.

From May 20-22, attendees of the world’s biggest dance music festival enjoyed the sonic stylings of genre juggernauts like Charlotte de Witte, Subtronics, Carl Craig, Grimes, The Chainsmokers, Liquid Stranger, Kaskade, REZZ, Fisher, LP Giobbi, Porter Robinson, Eric Prydza and a cavalcade of the who’s who of the dance genre. (And from the industry too, with the event’s backstage area always serving as a high-level spot to schmooze amongst agents and managers.)

For the 125,000-plus attendees roaming the festival each day, the guide mapped wide thoroughfares with whimsical names like Daisy Lane and Electric Avenue. Strolling along these paths served as a reminder to many that EDC’s scale notwithstanding, Insomniac Events’ attention to detail doesn’t quit. For fans, it’s a playground in which to revel in all the little adventures that take place in between sets.

In fact, for many who arrived for the second iteration of EDC in just seven months — with the festival returning to its standard end of May dates this past weekend for the first time since 2019 — what happens in between stages is just as important as the artists who perform on them. Over the years, EDC Las Vegas has birthed thousands of these timeless moments, and in the process has refined its own multi-sensory signature. To relive that journey and remember some of the magic moments of this past weekend, read on.

After a week or two of heightened stress levels, double checking and triple checking, and making 11 “last” grocery runs— the time had finally arrived to pull up to a parking spot at the Las Vegas Motor Speedway, the raceway 20 minutes north of the Strip where EDC has happened since 2011. As all the anticipation reached a boiling point at 5 p.m. on Friday evening — after around 90 minutes spent in the 97 degree heat — traffic began to subside and we exhaled, as all the effort was about to pay off. As always, the event began each night at dusk and went all night until down, with nightly temperatures dipping as low as a balmy 70 degrees over the weekend.

When either deadmau5 or Kaskade arrive onstage it’s a given that you’re about to experience a big-deal EDC moment. When they showed up together to give the debut performance of their new experimental collaborative project Kx5, it was like a rave dream made real. Playing unreleased Kx5 material while pulling deep cuts from each artist’s respective catalog (including Kaskade & Skyler Grey’s “Room For Happiness v3” and deadmau5 and Kiesza’s “Bridged By A Lightwave”), the pair naturally closed the show with their OG collab, the 2008 all time classic “I Remember.” Even deadmau5 expressed a bit of shock at the end of the set when he proclaimed, “I can’t believe this shit worked. 80%! Fuck yeah! Good night!”

Whether you’re into speed dating or you want to get legally married, EDC has a ton to do in its pop-up “downtown” environment that was expanded for 2022. As word got out about it, the entire section of the festival became packed too, just like the downtown area of your favorite city. Hottest among its many microcosms this year were a Tokyo-style Karaoke bar and the star-studded drag show.

After JAUZ performed a scintillating house music project known as Off the Deep End at the StereoBLOOM stage on Friday, old school JAUZ fans were pining for one of his trademark walluping sets. On Saturday night he went full beast, even bringing out Snoop Dogg to do it, with the rap icon performing hits including “The Next Episode” and “Gin and Juice” also extending the festival’s long history of A-list crossover moments that have previously included appearances by Drake, Lil Nas X, DJ Khalid and Bryan Cranston, who famously appeared as his Breaking Bad character Walter White during Above & Beyond’s set at EDC 2015. Snoop also brought the future to the fest by hosting an NFT drop for audience members via satellite.

During her Saturday night DJ set, Grimes sported an ethereal white gown while dropping unreleased music like the track “Welcome to the Opera,“ hits like 2020’s “We Appreciate Power” and a remix of Enya’s classic “Come Sail Away.  She also, like fellow NFT enthusiast Snoop, droped ZASH NFTs to fans via satellite. This type of drop was a first for the festival and another banner moment for NFTs, which have been a huge deal in the electronic music scene since their explosion in 2021.

Those looking for even more over the top action at the already over the top EDC only needed to look up. Friday’s winds prevented a lot of the planned aerial action and even caused organizers to evacuate Kinetic Field for approximately 20 minutes, but the spectacle of Saturday and Sunday made it up. Drones accompanied the nightly fireworks to write out “EDC Las Vegas” in the sky, a visual accompanied by seven-minute crescendo of oohs and aaaahs from the more than 100,000 people in attendance each day.

Sometimes the best way to find your tribe is by following your ears. For many, that meant stumbling onto the addictive piano house sounds of LP Giobbi. For others, it led them Dom Dolla’s set at KineticFIELD where he dropped the forthcoming single “Miracle Maker” or to SIDEPIECE’s set at the CircuitGROUNDS, for their new spin on the classic Rocky-famed track “Eye of the Tiger.” As per usual, it was a weekend that launched 100,000 Shazams, with drum & bass having a particularly heavy presence at the fest this year.

Dinner And a Show in Nomad’s Land

In the seemingly countless options for food and dining at EDC, the sit-down dinners located in Nomad’s Land were carefully prepared by a three Michelin star chef who inexplicably moved all the action of the dance floor onto the taste buds. Succulent skirt steak, fresh lemon halibut, decadent mashed potatoes, and baked Alaska were all complemented by imported wines and liquors, and offered a heightened experience than the standard slice of pizza. The cirque-inspired performance and juggling bartenders were an ideal accoutrement, making it perhaps the most genuine example of “Las Vegas” flair at the festival, as well.