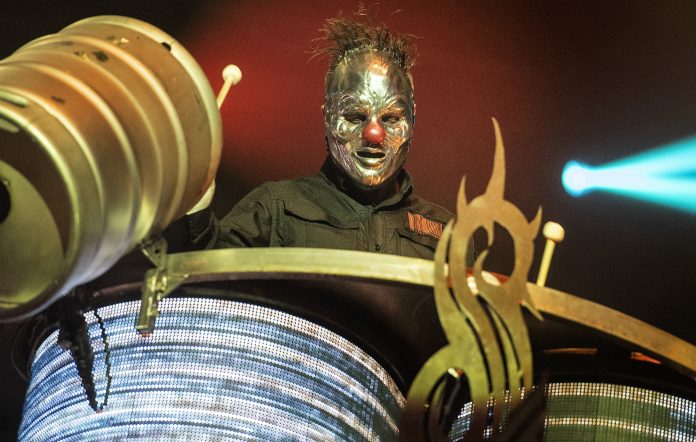 Slipknot percussionist Clown – aka M. Shawn Crahan – reportedly tore a bicep tendon during their Knotfest performance in Los Angeles on November 5, forcing him to miss the band’s appearance at Welcome To Rockville.

In a post shared to his Instagram, Crahan explained his noticeable absence at the festival, which took place on Thursday (November 11). Sharing a video of the band’s Knotfest show, he included a message that read: “If you look close enough you can pinpoint the exact frame where clown completely tore the bicep tendon from the radial tuberosity with proximal retraction, proximal to the coronoid fossa of the humerus.

“You may have realized I was not on stage in Florida with my brothers and my culture tonight. For this fact I am saddened.

“I had surgery today in Los Angeles, everything went great and I am recovering peacefully.”

As reported by Blabbermouth, Crahan shared in a 2012 interview with LA Weekly that he is “always injuring” himself during performances with Slipknot. “I don’t know if it’s because I’m a klutz or an idiot, I don’t know,” he said. “I treat every show like it’s the last… My kids know that if I die on stage, that’s where I should have gone.

“I don’t want to, though. I want to live for a very long time. I’d like to retire and leave on a good note.”

Slipknot performed their latest single, ‘The Chapeltown Rag’, live for the first time at Knotfest, having released the studio take on November 5.

Upon its release, the new single marked the Iowa outfit’s first new music since 2019’s ‘We Are Not Your Kind’. A five-star review by NME called the sixth studio album “an astonishing record: a roaring, horrifying delve into the guts of the band’s revulsion, a primal scream of endlessly inventive extreme metal and searing misanthropy.”