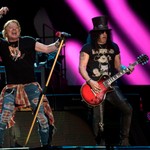 The reunited Guns N’ Roses have been barnstorming stadiums and arenas for more than five years. But to hear guitarist Slash tell it, despite all that time on the road together they haven’t yet started writing any new material for the group’s next album.

Slash and bassist Duff McKagan re-teamed with singer Axl Rose in 2016 for the wildly successful Not in This Lifetime global tour, which was the first time since the 1993 Use Your Illusion tour that the three performed together on stage. And though the original line-up’s last recording together was a cover of the Rolling Stones’ “Sympathy For the Devil” for the 1994 Interview With The Vampire soundtrack, in a new interview with Audacy, Slash reportedly revealed that they still haven’t laid down any new ideas together.

“As far as Guns is concerned. we haven’t even gotten to that point of really in earnest sitting down and writing,” said Slash about the process of writing and tracking the follow-up to what became the original band’s swan song, the 1993 covers collection The Spaghetti Incident? “We’ve been doing a lot of material that’s been sitting around for awhile. That will be a whole focused endeavor unto itself.”

He was seemingly referring to a couple of old tracks recently rolled out, including a studio version of “Hard Skool,” which was originally titled “Jackie Chan” when it was laid down for the group’s Chinese Democracy album; that long-in-the-works 2008 collection was the first and only album recorded by Rose with his group of replacement players.

The “Hard Skool” EP is due out on Feb. 25 and it will mark the first time in 28 years that Slash, Rose and McKagan have released new music together. The four-track EP will also feature another recently unearthed, unreleased song from the Democracy sessions, “ABSURD,” as well as live versions of “Don’t Cry” and “You’re Crazy.”

McKagan hinted that a new album could be on the horizon in 2019, when he said though GNR have never really run on a typical schedule, he’d heard some “magnificent,” “really cool” stuff that Rose was working on.

“Oh, it’s real, but the fun part and the cool part about Guns N’ Roses is we don’t really talk about it, and what happens next just happens,” McKagan said at the time. “So I’m excited about the possibilities with that, of course. I don’t mean to get anybody rabid. Our day will happen when it happens, that’s for sure.”