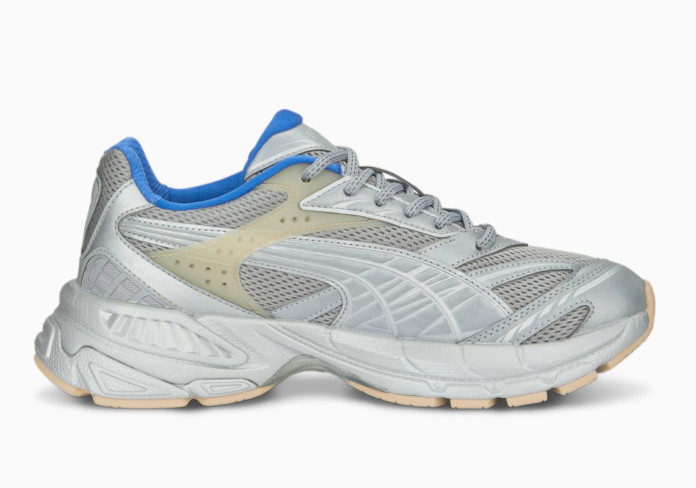 If you haven’t been following Skepta on social media over the past year-and-a-half, you likely missed that the English icon and Nike parted ways. The 40-year-old inked a deal with PUMA as global ambassador in September 2022, which explains why he promoted the brand’s VELOPHASIS Bionic silhouette while out during Paris Fashion Week 2023.

Unveiled via Instagram and confirmed through an official press release, the PUMA VELOPHASIS is the latest franchise from the German sportswear imprint. Comprised of Bionic and Phased offerings, the line of lifestyle sneakers draws inspiration from the early aughts, unifying performance breakthroughs from the turn of the century with on-trend Y2K style cues. The result is a mesh-heavy, comfortable, and accessibly-priced series of shoes with a co-sign as big as Big Smoke’s.

The PUMA VELOPHASIS Phased is the more affordable of the two aforementioned options, arriving at retailers with a $130 USD price tag. An asymmetric upper features honeycomb-patterned mesh, textured overlays, and a chunky sole unit paying homage to the brand’s COMPLETE line of the 2000s (specifically the Phasis model). At a quick glance, the VELOPHASIS Bionic resembles the Phased, but its higher $150 USD MSRP helps deliver some differences. The cushioned-focused counterpart to the Phased, the Bionic calls back to PUMA’s Velosis proposition of yesteryear, with debut color combinations providing sober, contemporary aesthetics.

Sneaker News emailed the brand to clarify whether or not “Phased” and “Bionic” options will be permanent fixtures or if they simply refer to standard and special editions of the individual PUMA VELOPHASIS model. The brand, however, didn’t respond before this story went live.

Enjoy images of the shoe ahead, while you wait for a puma.com launch come February.

For more from the German sportswear brand, check out the latest in LaMelo Ball shoes.