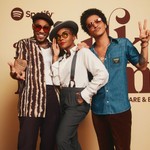 The fun-filled, invite only party — hosted by Spotify — was adorned in ’70s-themed decor, which perfectly aligned with Silk Sonic’s nostalgic vibe. Transforming the Peppermint Club into the one-night-only Silk Room, it was complete with delectable hors-d’œuvres, scenic photo installations, disco balls and skating servers dressed in shimmery gold attire.

Throughout the evening, .Paak and Mars serenaded the audience with their renditions of classic songs including “All Night Long” by Lionel Richie, “I Want You Back” by The Jackson 5 and the reggae hit “Turn Me On” by Kevin Lyttle. They also delivered Mars’ 2016 top five Billboard Hot 100 jam “24K Magic” before previewing new music from the upcoming album alongside Mars’ Hooligans band.

After warming up the crowd with iconic covers, the sunglass-clad Silk Sonic and The Hooligans introduced the all-new album by performing their newest song “Smokin Out the Window.” “This is the No. 1 song on Spotify,” Mars said before kicking off the track. As of Thursday (Nov. 11), “Smokin Out the Window” remains at No. 1 on the digital platform’s Top 200 U.S. list. Silk Sonic’s lead single from the album, “Leave the Door Open,” holds the 36th spot on the tally, while their second single “Skate” is at No. 79.

The sonically soothing duo surprised the audience with a special performance of a brand-new song. “Wanna hear something no one has heard yet?” Mars asked the crowd before breaking into Silk Sonic’s new jam “Fly as Me.” In it, the pair croon about finding a love interest who can match their fly. The song also pays homage to the late boxing champion Muhammad Ali, with lyrics that include his famous “float like a butterfly” line.

At one point during the big night, Mars took a moment to shout out .Paak’s musical abilities. “This is one of the greatest drummers you’re ever gonna see,” he told the audience, who responded with another round of applause. Multiple Grammy-winners Mars and .Paak joined forces to become the Billboard chart-topping R&B duo Silk Sonic earlier this year and released their debut single, “Leave the Door Open,” in March. The song hit No. 1 on the Billboard Hot 100.

Silk Sonic also delivered the debut live performance of “777” at the intimate venue. “Me and Andy went to Las Vegas and came up on some money this one time,” Mars joked before the band began performing the catchy tune. Moments later, the hitmaker also thanked the audience for supporting the group. “This is our first show,” Mars said. “We appreciate y’all.”

While the evening marked their first-ever concert performance, Silk Sonic hit the stage at the 63rd annual Grammy Awards in January to deliver their breakout tune “Leave the Door Open.” Months later, they performed the crowd-pleaser at the 2021 BET Awards and iHeartRadio Music Awards — each performance raking in millions of views.

After delivering groovy bops throughout the duration of their set, Silk Sonic wrapped up their performance with the most highly anticipated song of the night: lead single “Leave the Door Open.”

“Do y’all wanna hear that one?” .Paak asked the crowd before the the Silk Room echoed with cheer. “Then we gotta play it!” The audience and venue staff alike broke out into song for the show’s finale before Silk Sonic took a bow while receiving a standing ovation. The pair later sat in a VIP booth adjacent to the stage as the party went on.

An Evening With Silk Sonic is due Friday via Aftermath Entertainment and Atlantic Recording Corporation.