HomeNewsSigrid has been writing with Bring Me The Horizon, covers ‘Mantra’
News 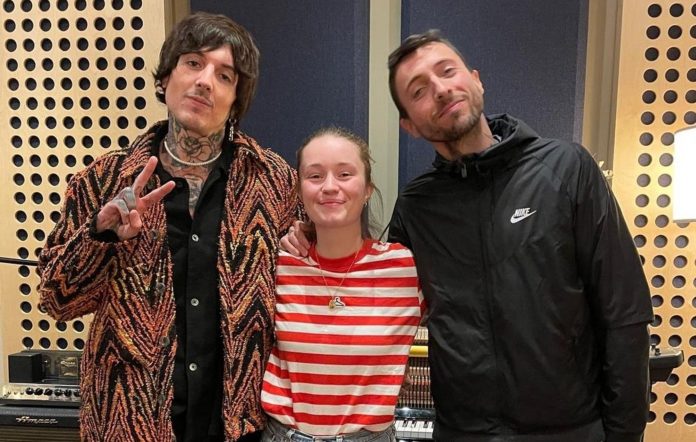 Sigrid has been in the studio with Bring Me The Horizon’s Oli Sykes and Jordan Fish and is teasing a new song they’ve been working on together.

READ MORE: Sigrid: “There’s a part of me that comes out when I play live – it’s my superpower”

Sharing an in-the-studio piano rendition of Bring Me The Horizon’s 2018 single ‘Mantra’ on her TikTok, Sigrid captioned the clip: “Just wait til you hear what we wrote #Rocktober” and tagged the Sheffield band.

In the video itself, which you can see below, keyboardist Fish can be seen loitering in the background before frontman Sykes pops up to sing alongside Sigrid.

Sigrid has also shared a photo with Sykes and Fish on Instagram, calling them “legends”.

In an interview with NME earlier this year at Reading Festival, Sigrid spoke about her love of heavier music, saying: “I’m a huge fan of rock music and I think you can hear that in the new music I’ve been making too. On my new single ‘Burning Bridges’, you really hear ‘Rock Sigrid’. You’ll definitely see that live energy from me again, I’ve missed it.”

She’s also discussed the impact Nirvana had on her growing up, telling NME: “For one school play, I played ‘Smells Like Teen Spirit’ with a backing band of my classmates and everyone was shocked, like, ‘Where did that come from?’ It was great. I think that playing that rock song in front of 20 kids at school gave me a new confidence. From then on, I wasn’t just that piano girl. I showed another energy that I had.”

Bring Me The Horizon have also been talking about going more pop on the follow-up to 2020’s ‘Post Human: Survival Horror’ with Sykes telling NME: “I come from a heavy background and rock music was my first obsession, but at the same time I’ve always loved pop music. How do we blend those two worlds completely and not just make pop-y rock music but make extreme pop music? That was the goal of this record.”

“We wanted to take some of that intensity, craziness and the unhinged-ness of that (Hyperpop) world and bleed it into our song,” he continued. “It took a little while, but now that we’ve got that first song (‘DiE4u‘) we know what direction we’re heading in.”

The post Sigrid has been writing with Bring Me The Horizon, covers ‘Mantra’ appeared first on NME.