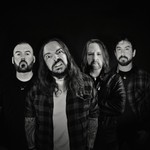 “Wasteland” is the Shaun Morgan-led rockers’ third No. 1 from their latest album Si Vis Pacem, Para Bellum, giving the group a trio of toppers from a single set for the first time, as well as its first streak of three No. 1s in a row. The LP’s “Dangerous” led for three weeks in October 2020, followed by two frames for “Bruised and Bloodied” this May.

Concurrently, “Wasteland” lifts 8-7 on the all-rock-format, audience-based Rock & Alternative Airplay chart with 3.1 million audience impressions, up 7%, according to MRC Data. It’s Seether’s highest-ranking song on the list since “Tonight,” which peaked at No. 4 in November 2011.

“Wasteland” also breaks into the top 10 of the multi-metric Hot Hard Rock Songs survey, leaping 13-10 with 136,000 U.S. streams in addition to its radio audience.