HomeMusicSee Lady Gaga Dressed to Kill as Patrizia in New ‘House of...
Music 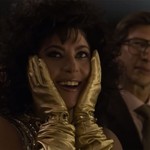 Lady Gaga is set to make her follow-up to 2018’s A Star Is Born with House of Gucci’s arrival on Nov. 26. With just one month left before the star-studded film premieres, a new teaser released Wednesday (Oct. 27) shows the “Rain on Me” singer as Patrizia Reggiani having her first encounter with fashion house mogul Maurizio Gucci.

In the sneak peek, Gaga wears a red gown, black gloves and diamonds as she introduces herself to Gucci (Adam Driver) at a party. The pair dances the night away, before the trailer progresses to scenes that establish the Gucci family’s wealth: Italian ski trips, waterfront vacation homes and luxurious fashion.

“Gucci is like a cake. And you have a taste and you want more and then you’ll want the whole thing for yourself,” Driver says in the trailer, which ends with Gaga promising Paolo Gucci (played by an unrecognizable Jared Leto) to keep a secret and swearing on a modified holy cross: “Father, son and House of Gucci.”

Gaga spoke to The Wall Street Journal about playing Patrizia in House of Gucci and revealed that her partnership with Love for Sale collaborator Tony Bennett inspired her to nail the character. “I knew I was about to play a murderer. I also knew how Tony feels about Italians being represented in film in terms of crime. I wanted to make a real person out of Patrizia, not a caricature,” explained Gaga. “I felt the best way to honor Maurizio and Italians was for my performance to be authentic, from the perspective of a woman. Not an Italian-American woman, but an Italian woman.”

“Choosing to work in a film that’s set in Italy is where my heart lies. When I went over to film this year, every day I was able to plant my feet on the ground and know that I was in a place where my family lived before coming here and working hard so I could have a better life,” the 35-year-old added.

House of Gucci will be released Nov. 26. Watch the new teaser below.