HomeMusicSealed With a Kiss: Travis Barker Gets Inked With Kourtney Kardashian’s Lips
Music

Sealed With a Kiss: Travis Barker Gets Inked With Kourtney Kardashian’s Lips 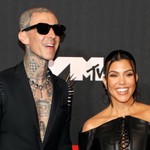 Travis Barker proved his love for fiancée Kourtney Kardashian is more than skin deep with a new tattoo of his beloved’s lips on his forearm. The reveal of the latest tat on Barker’s heavily adorned torso came after tattoo artist Scott Campbell posted an image of his handiwork with the caption, “Scorpio season. On @travisbarker … Lips straight from the mouth of @kourtneykardash Congrats you two.”

The pair of black lips sit just under another new image on Barker’s arm: a giant scorpion placed on top of some old ink. The Blink-182 drummer and in-demand session player/producer gave Campbell the thumbs-up for his work, responding with a scorpion and black heart emoji.

Barker spotlighted the lips as well in a series of photos he dubbed “scorpio season” — the veteran rocker’s astrological sign is Scorpio and his 46th birthday is coming up on Nov. 14. In the pics he’s rocking a studded leather jacket, black wool hat and a vintage Adam Ant t-shirt. It’s just his latest body art homage to his intended, following up on the design of her name above his heart, which was later joined by the phrase “I love you,” which Kourt applied herself.

The PDA-loving couple celebrated Halloween a week early over the weekend when they dressed up as ill-fated punk couple Sid Vicious and Nancy Spungen. Barker wore a black leather jacket, spiky black wig and Sid’s signature padlock necklace to embody the doomed Sex Pistols bassist, while Kardashian wore a sheer fishnet shirt over a black bra with a curly blonde wig to dress up as the rocker’s equally tragic girlfriend.

Check out Barker’s new ink below.