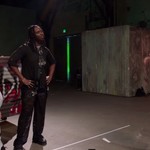 In the latest episode of her Facebook series Cardi Tries, rapper Cardi B faces her biggest fear just in time for Halloween. And, in case you were wondering, Cardi ain’t afraid of no ghosts. “Well, since we’re doing Halloween. Everybody talking about facing your fears. People think that facing your fears means ‘oh ghosts and haunted houses!’ I’m not afraid of that. I’m afraid of heights and oceans,” a very pregnant Cardi says in the episode, in which she’s joined by actors/influencers and hosts of the “We Said What We Said” podcast Rickey Thompson and Denzel Dion.

Thompson quickly shares that he’s jumped out of a plane, so heights are not a problem; for the record, Dion was there for “moral support” during Thompson’s parachute adventure, but absolutely did not jump. While Cardi isn’t sure what caused her fear of heights, she tells the pair that she’s afraid of falling, tumbling and breaking her leg or teeth. How afraid is the exotic-dancer-turned-global-superstar of getting too high?

“Even sometimes when I be trying to climb the [stripper] pole, I be like, ‘Oh my gosh, I’m too high!’ And that’s crazy because I wasn’t like that before,” says Cardi, who adds, “I feel like getting money makes you sensitive.”

Rocking a skin-tight silver jumpsuit the visibly preggers Cardi gingerly enters a spooky warehouse as Thompson promises to help Cardi conquer her fears. The rapper steps up to an Oculus VR headset, which transports Cardi and Dion into an elevator and then to the top floor of what she yelps is a “tall-a– building!”

With helicopters swirling around, Cardi walks a very narrow wooden plank that [virtually] takes her off the side of the building as Thompson holds her hand and she looks around at the city from a bird’s eye view. “I didn’t like that,” a freaked-out Cardi says. While Dion takes a virtual tumble, Cardi successfully walks the plank, before moving on to the second challenge: a ride on a crane that takes the pair 30 feet into the air.

“It’s not stable,” Cardi laments before being hoisted on the custom lift with her name spray-painted on the front. “That wasn’t so bad, that was kind of fun,” she says afterwards, feeling like she’s ready to go even higher. But when they head outside and see a 100-foot crane the answer is a hard “hell no” from Cardi.

While the rapper is pretty chill on the way up, Dion is not having it, screaming “get me down!” as the pair climb into the sky. “Don’t look down!” Cardi warns as the crane tops out at 80 feet, joking that they should spit on Thompson from above. “Wait, so we didn’t even do 100?” Cardi says as fireworks pop off around her when she and Dion are safely back on solid ground. “That s–t was high.”

“Rickey and Denzel I was so happy that you helped me face my fears,” she says at the end. “Well – actually no, I’m not really that happy. You lied to us… I don’t really want to face no more fears, today was just enough… I hated today, today was a bad experience.” In previous episodes Cardi helped a same-sex couple get married, tried rhythmic gymnastics, Latin food and got up close and personal with some zoo animals.

Check out the latest episode of Cardi Tries below or watch it with your friends and family with the FB Watch Together via Messenger.