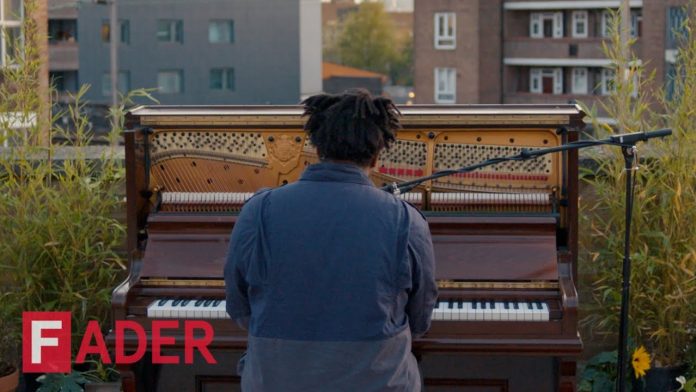 Sampha details his debut album, and all the learning and personal trauma that accompanied its creation, in a new The FADER cover story, to be published on The FADER today at 10 a.m. EST.

“Plastic 100°C,” a beautifully raw song about pressure, is one of that album’s highlights. Its chorus refers to feeling like plastic melting in the heat, and one of its verses hints at the source of the discomfort Sampha describes: Usually I’d run home/ And tuck the issue under/ Oh/ Sleeping with my worries/ I didn’t really know what that lump was/ My luck.

Here, Sampha plays a singular acoustic version of that song. His performance was captured in one beautiful take at dusk, on the rooftop of his label Young Turks’s London office.

“There’s a lot I see, feel, really want to express,” Sampha tells The FADER. “I think that’s part of the thing, like — I feel so much.” In his most in-depth interview to date, he opens up about the journey he’s been on, the music he’ll be releasing, and his hopes for the future. “I wanna make things feel more magic to me, like how I felt when I was younger. When you grow older, you try and work harder to find the magic in life.”

Bay Area To The White House: E-40, Too $hort and Mistah F.A.B. Join Sway to Celebrate The Warriors

Patti Smith pens heartfelt Tom Verlaine tribute: “There was no one like Tom”