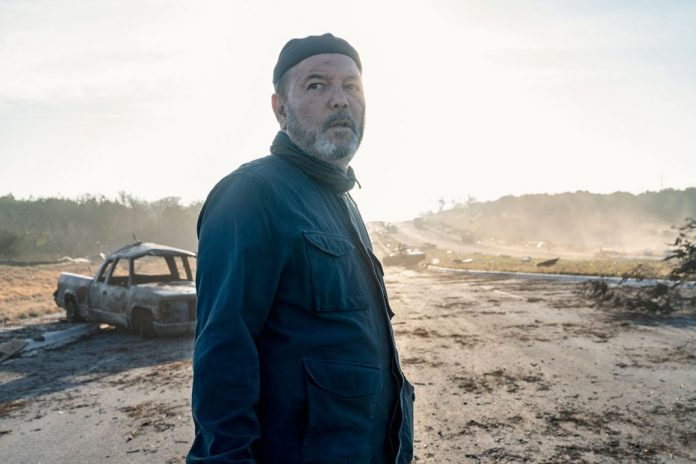 Truth be told, Ruben Blades never sought his cult icon status. And yet, here he is at 73, receiving the Latin Academy’s Person of the Year Award — reserved for superstars –and so perennially hip that Rosalía cited him as an influence on her recent Weeknd collab “La fama,” while the mere subject of him unleashed a week-long social media back and forth between J Balvin and Residente that’s garnered millions of views.

“I keep on writing what I write, documenting reality, and that’s been my saving grace,” says the Panamenian salsa star –who’s had second, third and fourth acts as turned tourism minister, presidential candidate and producer/actor for film and television (he currently plays the indomitable Daniel Salazar in Fear the Walking Dead, which is entering its eighth season).

Tonight, Blades will be feted by the likes of Farruko and Residente. Tomorrow, he’ll vie for Latin Grammys in the Album of the year and Best Salsa Album of the year categories for his exquisite and danceable Salswing! and Salsa Plus! respectively, bilingual albums recorded with Panama’s Roberto Delgado & Orchestra where he alternates from salsa to swing, and from English to Spanish. On Saturday, he kicks off his Salswing! Tour in Oakland with the full 20-piece band. And in 2022, he has a full agenda that includes season 8 of Fear the Walking Dead, more touring and a series of new albums out on his own label, Ruben Blades Productions.

It sounds exhausting, but today, wearing trim gray sweatpants, sweatshirt and a beanie, and sporting a close-cut beard that highlights grey eyes, Blades looks tall and fit, way younger than a man his age has a right to look. More to the point, Blades still sounds fascinating, both musically and in the words he says. Here’s an excerpt from his recent conversation with Billboard.

In Fear the Walking Dead, Daniel Salazar is a force of nature. And I must say, you look amazing and nowhere near your age…

Age is a victory for me. I never saw it as a problem, not even when I was younger. Every year you live is a triumph over death that gives you an extended possibility of doing more things and making other people happy. I always thought it was absurd when people said, “Hey, you’re getting old!” What’s the alternative, baby? To die! Would that make me or you happy? What destroys human beings isn’t age; it’s indifference.

You do so many things. Do you still enjoy getting up onstage and singing?

You know, after not singing for two years, my biggest fear was losing my voice. When I worked in government in Panama, I didn’t sing for five years. All I did was record “La Perla” with René (Residente). I didn’t miss singing because I had a stage; the stage of public service. I can compartmentalize.

Do you love Fear the Walking Dead?

Very much. First, because the show doesn’t depend on me. It’s an ensemble, and I learn from that collaboration, and I get nourished from everybody else’s work. And I’m interpreting someone else. I usually interpret myself when I’m singing with the band. And second, analyzing this coldly, Fear the Walking Dead reaches 132 countries.

Plus, it’s so different to work in TV vs. film, which is what you’ve done for years…

Television is much harder. Especially because Daniel was an intelligence operative and he’s very active. He’s always fighting and getting into problems… he’s a survivor. Salazar is the kind of person that walks into a place and the first thing he does is figure out an exit. So, he’s a guy with huge response capacity, which is invaluable. I wish I had his skills. I’ve been shot in the face, I’ve been struck by lightning. Getting killed would be an extreme. Obviously I have no control over that, because the series creatives determine that. But my character is very interesting at a global level. How many Latins are in prime time? Very few. How many Latins over 70 are working in prime time? None.

Do you ever think, “Wow, I opened this door?”

No. Other people’s questions are what makes one reflect.  I never think about what I’ve done or accomplished. What you did is done. In fact, I’m very thankful to the Academy for the honor they’re bestowing on me — but it will be tough to sit there and listen to people talk about me.

But I’m very thankful to the Academy. For example, they allowed us to perform on the telecast [in 2017] when we won album of the year [for Salsa Big Band with Robert Delgado & Orquestra]. It’s rare for a salsa band to perform on television [these days], and there are amazing people like Gilberto Santa Rosa, Oscar D’León or El Gran Combo, who I hope perform on a telecast soon. In fact, this year for album of the year, for best salsa album, I voted for Rafael Ithier and El Gran Combo de Puerto Rico. I think my album is a great album, but I’m incapable of voting against Rafael Ithier.

Rubén Blades as Daniel Salazar on ‘Fear the Walking Dead’

Speaking about your Latin Grammy nominations, I was surprised to hear you sing in English. You have two nominated albums, in fact…

Yes — because with the band it’s about opening roads. We’re vying for a Grammy in best jazz arrangement, for example. We don’t want to just be a one trick pony. And I really enjoy tearing down stereotypes. In this case, the stereotype of the salsa band. And, to be clear, I don’t mind being called a salsa band… but this is a music band. I’m a big fan of swing and rock and Hindu music.

In fact, many of the swing covers you play in these albums, are the original arrangements, correct?

Except for the arrangement of “Ya No Me Duele,” which is an arrangement by Tom Kubis of a song by Jeremy Bosch where I added new lyrics. And the arrangement of “Pennies From Heaven,” which is also a new arrangement by Tom Kubis, and the adaptation we did of “The Way You Look Tonight,” where we added a few measures and a variation at the end. The best homage to Sinatra is to do something with his song that would surprise him. Same thing with Bennet. My aim was not to copy, but to take a standard and look at it from a different angle.

I’ve played with Winton Marsalis and the Lincoln Center Jazz Orchestra, which is the best jazz ensemble in the world. So, jazz musicians aren’t surprised by what I can do. Those that are surprised are the ones who only see me in one dimension. And my band is a band from Panama. Usually, when we talk [Latin] bands we talk bands from Puerto Rico, Cuba, Venezuela, Colombia, but rarely Panama. Now, they have to talk about Panama, and the boys in the band have realized all they can do. They’re not limited to [one genre].

Now, the label is your label, and you finance everything?

Yes. The only thing I don’t finance is payola.

You’re writing a memoir, short stories, poems, articles. Will you return to politics or do you no longer want to be involved?

No, no, no. I’ve never said that. What I haven’t said is that I’m not going to do it. I hope to contribute in the future and to continue contributing, absolutely, especially now that there’s so much confusion. I would only do politics in Panama. We have very serious problems in terms of corruption in the legislative and judicial areas… And I’m not talking s–t. I ran for president, I created a political party. And that gives me far more credibility, in my opinion, than someone who complains and does nothing for their country.

And you are very outspoken in your blog.

The problem is still the extremes. You have the far right and the far left and they’re exactly the same. Both censor, neither wants opposition, both attack you. Extreme fascism and extreme communism are the same thing. The problem with the internet today is there are platforms that allow people to spill their insanity. So now, we have to discuss if the world is round or if the vaccine has a chip that connects you to Bill Gates. There used to be facts. Now, all of us who have an opinion have to provide explanations. I even have to explain how to pronounce my name: Blades [in English] or Blades [in Spanish]. That became an issue. My position now is: Any issue, no matter how silly it is, I reply to it in my blog.

You are such a versatile person. But do you see yourself first and foremost as a salsa musician?

I am a musician dedicated to Afro Cuban music. That’s what I do. That’s what I’m doing right now. I would like to be defined as a “musician.” But if I look at my body of recorded work, they’re all within the Afro Cuban format. And I’m not ashamed of that nor do I feel less. What bothers me is to only be assigned that place. Like saying, “That’s your seat, and you can’t move.” That’s not right. I choose to be there. But I can move here, and there and there and do whatever I please. And that’s the other issue. I don’t think an artist owes himself to his audience. An artist owes himself to himself. When I perform, I don’t simply play what people want. I go to offer and share with them all these songs we’ve created.

But don’t you always play classics like “Pedro Navaja” for example?

Always! Absolutely. Not only that: I use the exact same pregones [improvisations], because people sing them along with me. There are certain songs you can’t change. But, on the other hand, I’m not going to write something because fans are going to like it.

You, and your music, have so resoundingly stood the test of time. Where do you go from here?

I keep on writing what I write, documenting reality, and that’s been my saving grace. Can you imagine if I were singing “Desnúdate otra vez” at 73 years old? Or doing reggaetón videos and twerking? I think you always need to have at least the consideration that what you’re doing will be relevant years from now. I’m still singing “Pedro Navaja,” and that came out in 1978.

But you wrote that song because it was a fascinating story, right?

I wrote it assuming the song spoke about things people would be interested in. I grew up listening to stories and tales. We have a very strong oral tradition in Latin America. When I was born [there was no television in Panama]. People would gather and tell stories. I always focused on storytelling and that’s why the songs don’t have an expiration date, nor do they obey commercial imperatives. After I wrote “Pedro Navaja,” I didn’t write “The Son of Pedro Navaja.” After I wrote “Plástico” I didn’t write “Cellophane.” Gabriel García Márquez [who was a good friend of Blades’] always told me: You’re a storyteller. You’re a writer that sings.