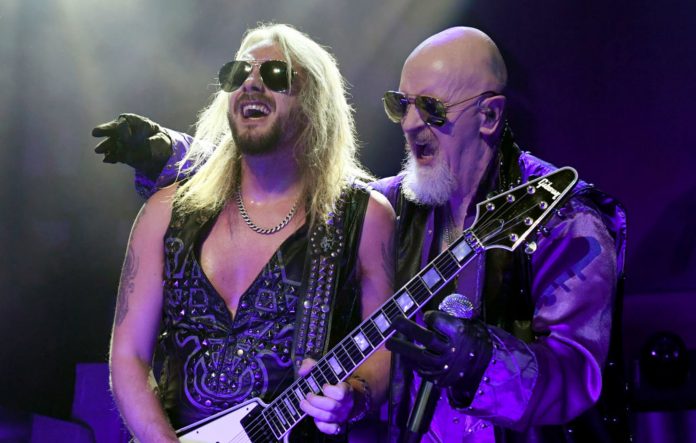 READ MORE: Judas Priest’s Rob Halford: “I tried to throw a TV out of a hotel window once. It was like Mr Bean does Spinal Tap”

During a performance of ‘Painkiller’ at the end of Judas Priest’s set on the final day of Louisville’s Louder Than Life festival, Faulkner suffered “an aortic aneurysm and complete aortic dissection”.

The 41-year-old was rushed off stage and immediately underwent a 10-hour surgery, where five parts of his chest were replaced with “mechanical components”.

“It was something very alien to me,” Faulkner told the Louisville Courier Journal, explaining that the band had done a lot of physical preparation prior to the incident. “We’re becoming stage fit, so for something like that to rear its head while I was playing, was something that was very unusual.”

Halford has now shared an update on Faulkner’s health, telling Heavy Consequence that he has “good news” regarding his friend and bandmate’s recovery.

Footage from the incident has been circulating the internet, but Halford has said he’s not ready to watch it as he’s “still shook up”.

“I can’t look at that yet,” the frontman explained. “I’m still shook up, emotionally. Eventually I’ll try to watch the footage, but [Faulkner] says in his own words when he looked at that footage he sees a dying man, which is basically what it was.”

He continued: “And it’s just incredible that he got through that song and he came to the dressing room and he got changed. Even after the paramedics told him he needs to go the hospital and get a proper look at the stuff, he was like, ‘Yeah, I’ll be back. I’m going home for a couple days after this show, I’ll see you guys in Denver’ and walked out the door and then probably less than an hour later he was having over 10 hours of heart surgery. It’s just unbelievable.”

Meanwhile, Halford has revealed the best piece of advice he’s ever received was from Kiss‘ Gene Simmons.

Speaking in a recent interview, Halford talked about the wisdom he’s collected over the years, including the time Simmons offered him some gems about the music industry.