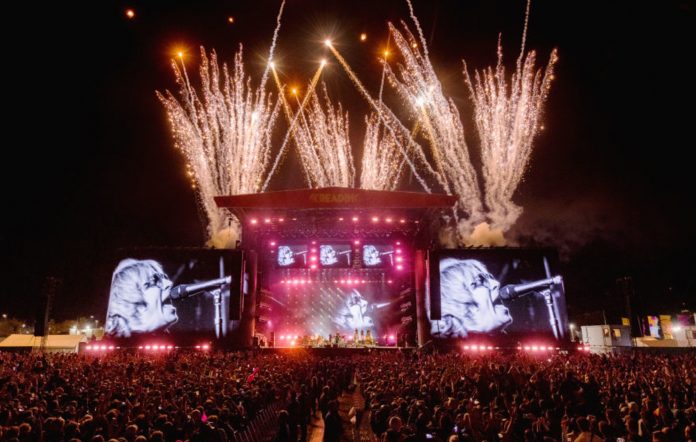 Reading & Leeds organisers have announced that the festival will be announcing line-up news for its 2022 event early next month.

“Are you ready for some #RandL22 lineup news? Coming early December!” the festival wrote on Twitter today (November 16), teasing an incoming announcement.

It comes after Festival Republic boss Melvin Benn told NME back in August that three of the six headliners for next year’s event had already been booked. Not giving much away as to who they would be, he teased that “some of them have guitars”, and only one of them has headlined before.

Asked whether the festival would be rebooking the overseas artists who pulled out this year’s event – namely Machine Gun Kelly and Queens Of The Stone Age – due to complications brought on by the coronavirus pandemic, Benn said R+L 2022 will be “a whole new ball game”.

“As you’ve seen from 2020 into this year, we don’t just rebook acts for the sake of it. What we want to do is book a relevant festival every year, and not just rebook the acts who have cancelled,” he told NME.

Are you ready for some #RandL22 lineup news? Coming early December!

In the meantime, First Release tickets are still available for purchase below!

In a four-star review of the event, NME‘s Sophie Williams said of Gallagher’s closing set at this year’s event: “For all of the OTT celebrations of our gradual freedom and normality, the closing set from Liam Gallagher ends the festival with a six-song run through Oasis goldies, dedicating a typically biblical ‘Live Forever’ to the late Rolling Stones drummer Charlie Watts.

“Much like this weekend’s thrilling – if sometimes reserved – return to festival life, it’s glorious, moving, and means everything.”