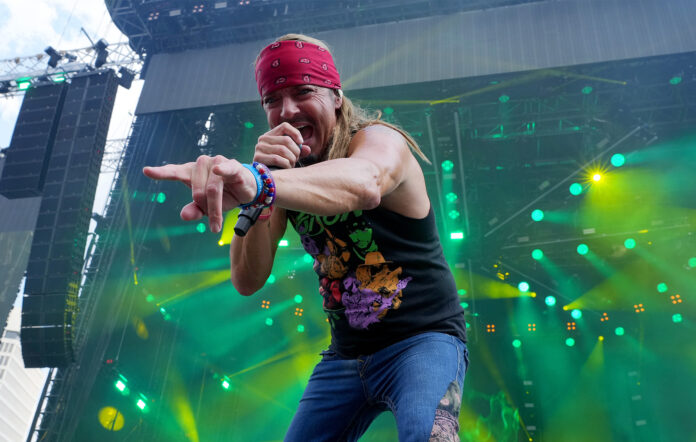 Poison were forced to cancel their performance in Nashville on Thursday night (June 30), after frontman Bret Michaels was hospitalised due to “an unforeseen medical complication”.

The glam-metal outfit is currently on ‘The Stadium Tour’ with Def Leppard and Mötley Crüe, all of whom are co-headlining the North American run with Joan Jett & The Blackhearts as their support act. Initially slated to go down in 2020 (before being pushed back due to the ongoing pandemic), the tour kicked off in Atlanta on June 16.

Thursday’s show in Nashville – which took place at the 69,000-capacity Nissan Stadium – was the eighth show on the itinerary. All three of the remaining acts performed their sets as usual, while Michaels’ bandmates appeared onstage to announce their cancellation of their set.

In a post shared on social media that night, Michaels sent fans his “deepest apologies for being unable to rock the stage”. He explained: “I was truly fired up to get on stage in the Music City and perform, but due to an unforeseen medical complication [and] following hospitalization, it was not possible.”

The singer went on to say he was “working on being back 100 [per cent] very soon”, and in a follow-up post on his website, explained that he’d received hospice care including IV transmissions and medical tests. “[I] can’t thank enough Nashville’s incredible [and] determined medical staff,” he wrote, “who helped me as you can see with several IV sites to run tests [and] administer fluids.”

Michaels assured fans that he was “determined to try to rock Jacksonville [and] return for a Nashville show someday soon”. At the time of writing, Poison are yet to announce a new show in Nashville. They are, however, on schedule to continue their current tour in the Florida city of Jacksonville tonight (July 2), performing at the TIAA Bank Field.

Though Michaels has not shared a specific reason for his hospitalisation in Jacksonville, the singer has long struggled with health complications. 2010 saw him suffer both a brain haemorrhage and a stroke, while the following year, he underwent surgery to close the hole in his heart that he was left with after his stroke. In 2014, he was treated by paramedics midway through a concert in Manchester, New Hampshire.

Following tonight’s show in Jacksonville, ’The Stadium Tour’ will roll on until Friday September 9, when Poison, Def Leppard and Mötley Crüe take to the Allegiant Stadium in Las Vegas. There are 34 shows remaining altogether – find tickets for them here.