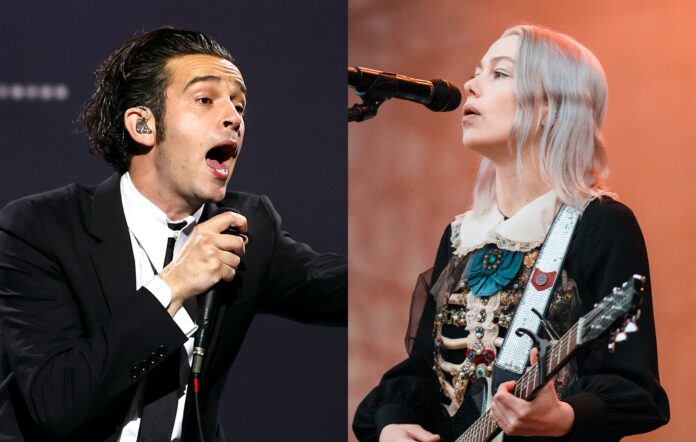 Phoebe Bridgers made a surprise appearance during The 1975‘s show in Los Angeles last night (November 28) – watch her performance of ‘Milk’ below.

READ MORE: The NME Big Read – The 1975: “I’d rather be a pretend supervillain than pretend hero”

The Manchester band were playing at the Kia Forum arena in Inglewood, California as part of their current 2022 North American headline tour, which kicked off earlier this month.

Footage has since emerged of Bridgers airing a solo acoustic cover of ‘Milk’ from The 1975’s 2012 EP ‘Sex’.

Check out a selection of fan-shot video here:

When @phoebe_bridgers surprises everyone and performs “Milk” at @the1975 show pic.twitter.com/tyWlUeXSVi

Bridgers appears in the music video for The 1975’s 2022 single ‘I’m In Love With You’, and previously collaborated with the group on ‘Jesus Christ 2005 God Bless America’ from 2020’s ‘Notes On A Conditional Form’.

Frontman Matty Healy performed the latter track with Bridgers at her concert in LA last year, where he appeared as a surprise opener.

Meanwhile, Healy has been sharing on-stage kisses with fans at some of The 1975’s recent gigs. The moments occurred during airings of ‘Robbers’ from their debut album.

The 1975 are set to bring their ‘At Their Very Best’ tour to the UK and Ireland in January 2023. It was confirmed last week that the band’s Dirty Hit label mate Bonnie Kemplay will support them at the shows. You can find any remaining tickets here.

In other news, Matty Healy has spoken about the aesthetic influence of Depeche Mode on his group. He also discussed his habit of writing songs that don’t have a chorus.