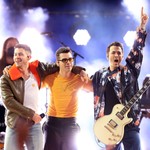 Never let it be said that Pete Davidson can dish, but not take it.

The 27-year-old funnyman was the brunt of some brutal jokes back in 2016 for the Comedy Central Roast of Rob Lowe. One particular burn was so harsh, it would have left a mark on anyone.

He took it like a champ. Fast-forward five years, and the SNL cast member is dishing it out, and it’s the Jonas Brothers who need to suck it up.

On Nov. 23, Netflix premieres Jonas Brothers Family Roast, which is pitched by the streaming giant as a “one of a kind comedy special” and one where the boys get a “roasting they’ll never forget.”

Davidson is happy to help with that. The stand-up specialist is apparently a JoBros “superfan,” so he knows all their pressure points. He finds some of them in a trailer, now streaming on YouTube.

“I’m a huge fan,” he admits. “I listen to the Jonas Brothers every time I’m in a supermarket.”

The JoBros can laugh. Their Remember This tour, one of the first true post-pandemic treks, has earned $300 million, and counting.

Feel the burn below.