HomeNewsPatti Smith says climate movement “is the most important thing on the...
News 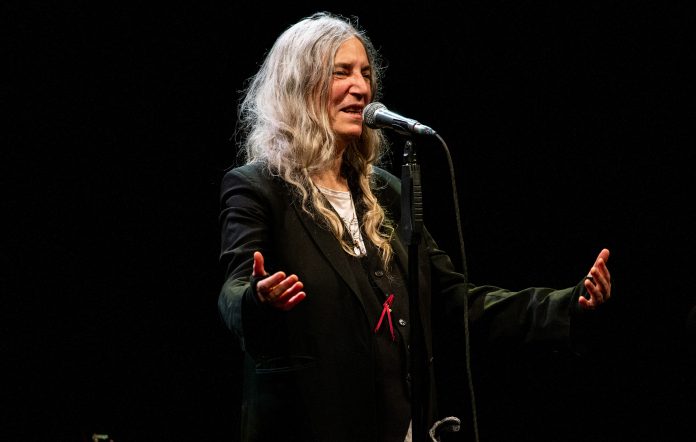 Patti Smith has spoken about climate change in a new interview.

Ahead of her headline performance at Cop26 (the United Nations Climate Change Conference) in Glasgow tomorrow (October 31), Smith spoke to The Guardian about her continuing fears for the environment.

Smith recalled meeting the Dalai Lama when the late Adam Yauch of the Beastie Boys asked the spiritual leader: “What’s the number-one thing that young people can do to make a better world?”

Smith recalled how the Dalai Lama replied: “Look after the environment.”
She continued: “I thought it was so beautiful. That was his number-one preoccupation. Not to free Tibet, but to take in hand a global concern that was going to affect us all, on a scale we haven’t seen before.”
“I think the climate movement is the most important thing on the planet right now. It permeates everything. Civil rights, human rights, women’s rights.
“…We just have to fight for what is right,” Smith added.

Patti Smith – Credit: Jo Hale/Redferns
Smith will play Glasgow’s Theatre Royal with an organisation called ‘Pathways to Paris’ – an organisation founded in the lead up to Cop21 in Paris by her daughter Jesse Paris Smith and musician Rebecca Foon.
The group brings musicians, performers, artists and activists together to encourage action on climate change.

Speaking about her daughter’s influence on her understanding of climate change, Smith added: “It’s Jesse that’s given me a chance to support the climate movement. I’ve learnt so much from her. She even taught me to recycle.

“I’m going to be 75 this year, I’ve seen a lot of changes in areas that were once beautiful. Things have already been destroyed and young people are being born into this, and they’re furious.”

Reviewing Smith’s gig at the Royal Albert Hall recently, NME said: “Buddy Holly’s ‘Not Fade Away’ and of course her rule-book ripping version of Van Morrison’s ‘Gloria’ also get a look-in, but it’s the elegiac ‘Pissing In A River’ from her 1976 album ‘Radio Ethiopia’ that is the night’s stand out.

“Almost heavy metal in its intensity, her hardcore growl nearly takes the roof off the room, passionate, poetic and perfectly Patti Smith.”

The post Patti Smith says climate movement “is the most important thing on the planet right now” appeared first on NME.