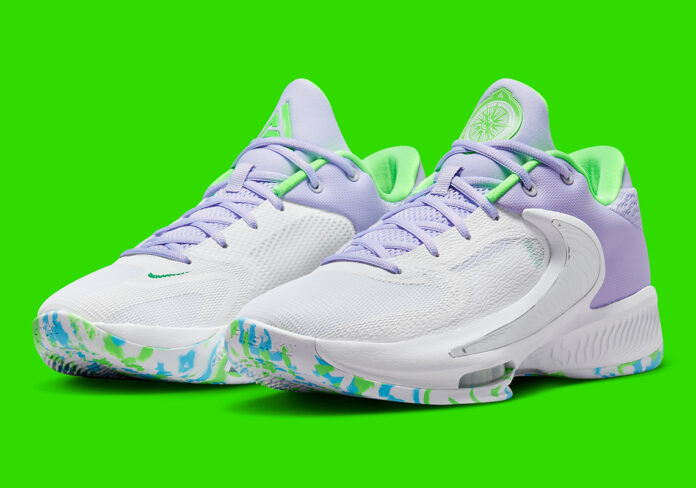 Leading the Eastern Conference as of the third and final fan voting update for the NBA All-Star Game, Giannis Antetokounmpo’s mid-season colorway is still under lock and key. While we await next month’s festivities in Salt Lake City, the Beaverton Brand will be tying the Nike Zoom Freak 4’s dedicated audience over with an “Oxygen Purple” and vibrant green accented effort.

Falling under his banner’s slate of colorfully tooled ensembles, an early springtime aesthetic lands on Giannis’ fourth signature silhouette by blending a crisp white forefoot construction with the latter half and tongue’s light lilac treatment. Further encompassing the laces and padded heel counter in the sectioned wash of lavender, the sock liner and insignias placed upon the tongue indulge in a near-neon “Stadium Green” ensemble. Transitioning away from the titular embellishments along the reverse Swoosh and rippled midsole’s bright white outfit, the medial side’s embroidered green Check works in tandem with the tread’s marbled finish featuring hits of white, cyan blue and the aforementioned green in conclusion.

Set to release next Thursday, February 2nd, enjoy official images of the Nike Zoom Freak 4 “Lilac/Green” below while we sit tight on further release details.

In other news, the collaborative YuGiOh x adidas ADI2000 is set to release tomorrow, January 26th.