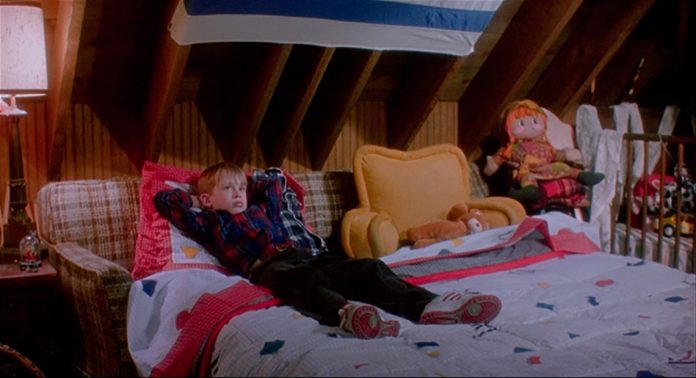 Rather than working with creative partners and designers of the modern day, adidas is looking to strike nostalgic notes by collaborating with classic Disney franchises of the past. It’s a shrewd move as anyone born in the Generation X period will likely take notice, and few have the draw power like Home Alone, the unforgettable 1990s Christmas holiday classic starring Macaulay Culkin.

For this holiday season, adidas has drawn up a blueprint for a Forum Low in collaboration with the film, settling on a white/red colorway presumably based on the sneakers worn by Kevin McAllister in the film. However, based on the timing of filming and the clear shot of the outsoles, the good-hearted mischief isn’t wearing the Forums, but rather the Phantom Low.

These upcoming adidas Forums feature the silhouette of their Chicago-area home in place of the trefoil, but the overall details are inspired by the assorted booby traps that Kevin sets in order to protect his abode from Marv and Harry aka the Wet Bandits. Blackened marks presumably represent the blowtorch that singed off the top of Harry’s head, while the medallion on the heel is a direct nod to the front doorknob. The orange cord at the heel could represent the tripwire that Kevin sets above the stairs.

The attached accessories tell the story more literally; the full arsenal of Kevin’s traps are on display in the form of pins (paint cans, the fan that blows the feathers, the iron, the broken ornaments, and the fire extinguisher), while the replaceable insoles feature the Operation HO HO HO blueprint as well as movie stills of Joe Pesci and Daniel Stern’s characters.

A release is likely expected this holiday season on adidas.com and select retailers, so stay tuned for updates and see a full look at official images here.