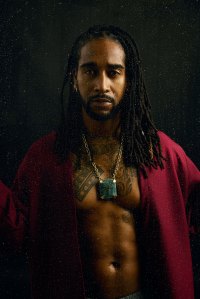 Decades before Omarion launched his second Millennium Tour on Oct. 1 as co-founder, executive producer and headliner, he was the teenaged lead singer of chart-topping boy band B2K. He was 17 when the quartet (comprised of fellow vocalists Lil’ Fizz, J-Boog and Raz-B) released their self-titled debut album in 2002, which premiered at No. 2 on the Billboard 200 albums chart.

“I’m part of such an early time in music that reminds you of the good times,” he theorizes to Billboard. “We’re the only tour that has that nostalgia.”

Now at 37, Omarion’s making his ninth career appearance on the Billboard Hot 100, thanks to his appearance on Summer Walker’s “Screwin.” The collab comes from Walker’s new album Still Over It, the first R&B LP by a woman to top the Billboard 200 in more than five years, with the largest streaming week ever for an R&B album by a female artist.

“I’ve been intentional about reintroducing myself,” the Grammy-nominated, platinum-selling solo artist says. “15 years ago I would’ve had to go through peaks and valleys [to achieve this level of success]. That’s why I’m proud of this tour and excited to be at this point in my career.”

These days, Omarion has been trending for something other than his vocals — memories of his old dance skills became the catalyst for the Omarion Challenge, after a social media user named Marlene posted a throwback clip of Omarion’s moves captured during a show in Chicago more than six years ago. The culmination of the pop culture moment came during his sold-out concert in Chicago on Oct. 29. As seen on video, Omarion gifted Marlene the signature red jacket he wore in the original recording. “I started getting notifications [of people mimicking my dance],” he laughs. “I was like, ‘Oh is this a joke now? This really is funny.’ I take full ownership in everything I do, even if people make fun of it.”

For Omarion, who’s maintained a clean image throughout his journey from “child prodigy” to dad of two (A’mei Kazuko Grandberry and Megaa Omari Grandberry), it’s gotten easier to turn public attention into good publicity. “Being that I grew up in the public eye, I had to learn lessons about ownership and responsibility,” says the star. “I never take things too personal. Everybody has an opinion. That’s why you have to know who you are.”

When asked why he believes the Millennium Tour (which features a lineup of fellow artists including Bow Wow, Sammie, Lloyd, Soulja Boy, Ying Yang Twins, Ashanti and Pretty Ricky) has been such a hit, Omarion credited its execution to his “tunnel vision” and ability to “focus on the magic moment, because these things come at the proper time.” After all, facilitating a national tour while adhering to various state COVID regulations is no easy task. But with the help of other tour special guests including Snoop Dogg, Chris Brown and Omarion’s B2K bandmates Lil Fizz and Raz-B, he says the journey is worth it.  “The tour is a mixture and great gumbo of what encapsulates the 2000s,” he explains, “and that’s pretty lit.”

Also lit is the tour logo, which he designed himself. The black, white and red Michael Jackson Bad-inspired design delivers “that vibe that says, ‘We bad on the Millennium Tour,’” he jokes. “It embodies the future, past and now.”

Indeed, Omarion and his tourmate Bow Wow have a long history. They first joined forces musically for their hit duets “Let Me Hold You” and “Girlfriend” more than 10 years ago; both songs cracked the top 40 on the Hot 100. “‘One day, ‘Girlfriend’ was playing during me and Bow’s [recent] meet and greet and I had a flashback about when Bow Wow and [producer] Jermaine [Dupri] got into an argument — and Bow Wow destroyed the studio because Jermaine was supposed to do the album, but we ended up working with other producers,” Omarion recalls, laughing. “It’s funny because he was so upset — like, ‘O! Let’s go man, we out.’ They obviously made up because they have a father, son relationship, but it’s hilarious.”

And while Omarion enjoys celebrating his past and bringing nostalgia to his fans, he’s looking forward to the 2022 release of his new book, Full Circle: Lessons and Takeaways on How to Live a Nonviolent Life, “As a child prodigy growing up in front of the world, I have a unique story,” he says. “And a lot to share about emotional intelligence, being unbothered and the importance of meditation and spirituality.”

Share
Facebook
Twitter
Pinterest
WhatsApp
Previous articleGetting Back in the DJ Booth: Lala the DJ Talks Street-to-Strip Club Music and Why Working With All-Female Teams is Important
Next articleAdele & Chris Stapleton ‘Easy on Me’ Collaboration Headed to Country Radio