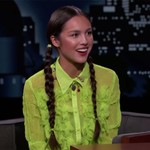 Olivia Rodrigo came to Jimmy Kimmel Live! on Tuesday (Oct. 26), where she discussed her history with writing songs and geeked out about being invited to the White House to encourage young people in her age demographic to get the COVID-19 vaccination.

Kimmel asked Rodrigo what led to her writing songs, and how that later evolved into her creating the Billboard Hot 100-topping hits on Sour. “I’ve always been doing it. I’ve been writing songs since I could literally talk,” the “traitor” singer explained. “My mom has home videos of me just making up gibberish songs about going to the grocery store and stuff like that when I was so young, but when I was nine years old, I learned how to play the piano and started writing more proper songs.”

Rodrigo revealed that the first good song that she remembers writing was called “Superman.” The 18-year-old shared that she “wrote it when I was nine or 10. It says ‘I don’t need no superman to come and save/ To come and teach me lessons/ Because I’m a human being/ And I can clean up my own messes.’”

Kimmel also spoke to Rodrigo about what it was like visiting the White House to encourage young people to get vaccinated against COVID-19 and shared the hilarious gifts that President Joe Biden sent her home with after their meeting.

“It was such an honor to go to support a cause that I am so passionate about. Everyone was just so kind. I got to meet Biden and Fauci,” Rodrigo said. “The White House is just the coolest place. I was so nervous to go, but I walked in here and there were all these plates that George Washington used to eat his dinner on. All of this crazy stuff, and I was scared I was going to sneeze and break such a priceless artifact, but I walked out and didn’t break anything.”

Kimmel put up a photo of Rodrigo and Biden on the screen and questioned if the president gave her the Ray-Ban aviator sunglasses she was wearing in the photo. “He gave me those, he gave me some M&Ms and he also gave me a shoehorn, which was strange…it had the presidential emblem on it, I’m serious,” she revealed. “It’s in my house.”

Watch Olivia Rodrigo on Kimmel below.