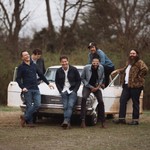 After a slight detour, Old Crow Medicine Show has flown back to ATO Records.

The folk band previously released 2012’s Carry Me Back and 2014’s Grammy-winning Remedy for ATO, before recording 2017’s 50 Years of Blonde On Blonde (Live) and 2018’s studio set Volunteer for Columbia Nashville. The collective’s 2019’s Live At the Ryman came out through The Orchard.

“We are very happy to be coming home to the ATO family,” Old Crow Medicine Show’s Ketch Secor said in a statement. “Their passion for music shows in everything they release and we’re just so excited to relaunch our partnership and recommit ourselves to making great records together.”

Jon Salter, head of ATO Records, added, “OCMS is one of the great and important American bands. They have always challenged themselves creatively and this new project is testament to that. We’re so thrilled and proud to welcome the band back with open arms to the ATO family and we are committed to continue to build their legacy.”

The band is now managed by Sally Williams in partnership with Red Light Management following longtime manager Norm Parenteau’s retirement. “Old Crow has influenced countless artists and built a devoted following over the years due to their energetic live shows and relatable music,” said Red Light Management founder Coran Capshaw. “Red Light is proud to be partnering with Sally Williams to continue the growth of this great band.”

In early 2020, Old Crow Medicine Show purchased a building in Nashville that they have turned into a studio. From there, the band has been recording new music, as well as live streaming its variety show, Hartland Hootenanny.

Over the last year, Old Crow Medicine Show has released three topical tracks: “Nashville Rising,” a benefit single written after March 2020’s tornadoes, “Quarantined,” a tongue-in-cheek track about not being able to kiss your lover while quarantined, and the NPR-commissioned “Pray for America.” None will appear on the new album, which will come out next year.

The band, who are booked by WME’s Bobby Cudd, are on the road now and will play their annual New Year’s Eve shows at Nashville’s Ryman Auditorium Dec. 30-31.