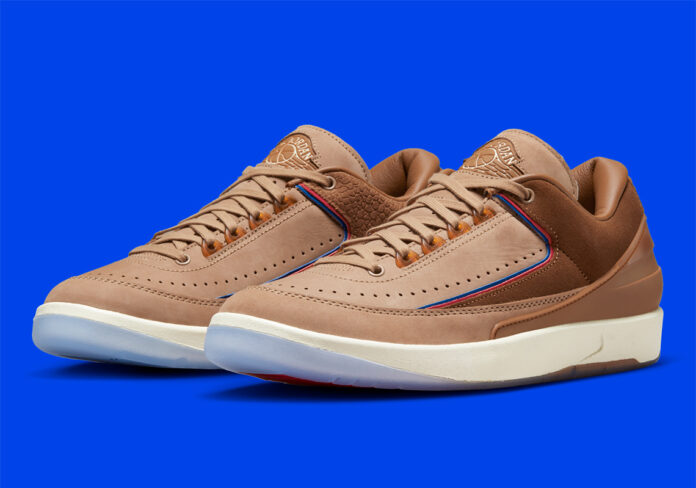 Having opened their doors in February of this year, retailer Two 18 is still relatively new to Detroit. But thanks likely in part to the backing of their sister store, Burn Rubber, the boutique has already caught the attention of Jordan Brand, who’ve provided them with their very own Air Jordan 2 Low.

Likely a love letter to Old Detroit as well as Two 18 themselves, the colorway relies almost exclusively on earth tones, with both light and dark browns dressing the upper’s premium suede. Said material, though mainly highlighted in two shades, proffers a wide spectrum of different textures: as it flaunts a light, cognac finish, the surface is velvety smooth, while its darker instances across the lateral and medial are coarse and reptile-like, respectively. The TPU heel piece and leather lining are dyed in complement unlike the piping along the profile, which sports red and blue in possible homage to the storefront’s logo as well as the Detroit Pistons.

In addition, the pair includes a number of elevated details, such as the debossed, leather constructed hangtag and engraved, silver metallic lace tips. And along the strings themselves, Two 18 has written “19-22 512” and “14-19 306.” Additional numbers appear along the backside of the left foot’s tongue, stamped just over top the phrase “THROUGH IT ALL.” What’s more, the packaging’s paper and the insole feature a zoomed in map of Detroit itself.

For a closer look at the Two 18 x Air Jordan 2 Low, check out the official images below. As of writing this, the retailer has yet to announce a release date, so sit tight as we await further word.

In other news, official images of the Air Jordan 12 Black/Taxi have surfaced.